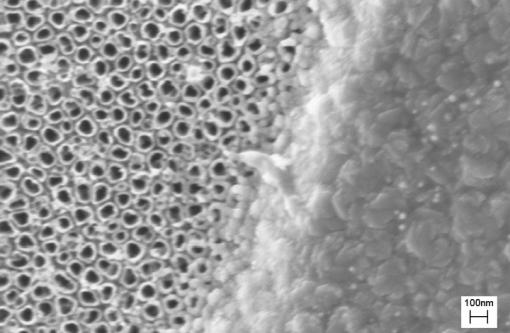 PROVIDENCE, R.I. [Brown University] — In recent years, researchers have worked to develop more flexible, functional prosthetics for soldiers returning home from battlefields in Afghanistan or Iraq with missing arms or legs. But even new prosthetics have trouble keeping bacteria from entering the body through the space where the device has been implanted.

“You need to close (the area) where the bacteria would enter the body, and that’s where the skin is,” said Thomas Webster, associate professor of engineering and orthopaedics at Brown University.

Webster and a team of researchers at Brown may have come across the right formula to deter bacterial migrants. The group reports two ways in which it modified the surface of titanium leg implants to promote skin cell growth, thereby creating a natural skin layer and sealing the gap where the device has been implanted into the body. The researchers also created a molecular chain to sprinkle skin-growing proteins on the implant to hasten skin growth.

The findings are published in the Journal of Biomedical Materials Research A.

Thomas Webster
Associate Professor of Engineering and OrthopaedicsThe researchers, including Melanie Zile, a Boston University student who worked in Webster’s lab as part of Brown’s Undergraduate Teaching and Research Awards program, and Sabrina Puckett, who earned her engineering doctorate last May, created two different surfaces at the nanoscale, dimensions less than a billionth of a meter.

In the first approach, the scientists fired an electron beam of titanium coating at the abutment (the piece of the implant that is inserted into the bone), creating a landscape of 20-nanometer mounds. Those mounds imitate the contours of natural skin and trick skin cells into colonizing the surface and growing additional keratinocytes, or skin cells.

Webster knew such a surface, roughened at the nanoscale, worked for regrowing bone cells and cartilage cells, but he was unsure whether it would be successful at growing skin cells. This may be the first time that a nanosurface created this way on titanium has been shown to attract skin cells.

The second approach, called anodization, involved dipping the abutment into hydrofluoric acid and giving it a jolt of electric current. This causes the titanium atoms on the abutment’s surface to scurry about and regather as hollow, tubular structures rising perpendicularly from the abutment’s surface. As with the nanomounds, skin cells quickly colonize the nanotubular surface.

In laboratory (in vitro) tests, the researchers report nearly a doubling of skin cell density on the implant surface; within five days, the keratinocyte density reached the point at which an impermeable skin layer bridging the abutment and the body had been created.

“You definitely have a complete layer of skin,” Webster said. “There’s no more gap for the bacteria to go through.”

To further promote skin cell growth around the implant, Webster’s team looked to FGF-2, a protein secreted by the skin to help other skin cells grow. Simply slathering the abutment with the proteins doesn’t work, as FGF-2 loses its effect when absorbed by the titanium. So the researchers came up with a synthetic molecular chain to bind FGF-2 to the titanium surface, while maintaining the protein’s skin-cell growing ability. Not surprisingly, in vitro tests showed the greatest density of skin cells on abutment surfaces using the nanomodified surfaces and laced with FGF-2. Moreover, the nanomodified surfaces create more surface area for FGF-2 proteins than would be available on traditional implants.

The next step is to perform in vivo studies; if they are successful, human trials could begin, although Webster said that could be years away.

The U.S. Department of Veterans Affairs and the U.S. National Science Foundation funded the research.