Houston – A University of Houston (UH) chemist who is developing materials for detecting and repelling E. coli has published papers in two high-impact journals this month.

Rigoberto “Gobet” Advincula, a polymer chemist, says he and his colleagues have developed two different materials that are both equally effective against E. coli. He discusses the findings in the June issues of Chemical Communications (ChemComm) and Chemistry of Materials.

The ChemComm paper, Advincula says, describes a graphene material that is proving to be an effective antimicrobial, while the research appearing in the journal Chemistry of Materials uses a conducting polymer that can repel E. coli. He says his team has created a smart film that not only can be used to turn bacterial adhesion on and off, but also may be used for detecting bacteria. The work was done in collaboration with Debora Rodrigues and her group from UH’s department of civil and environmental engineering. 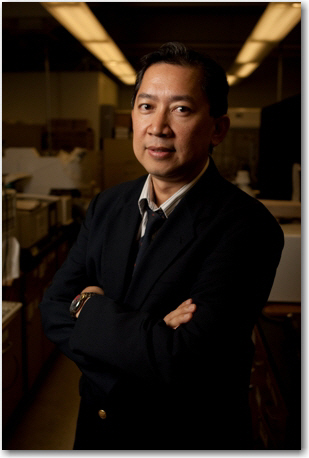 Prolific in inventing new and smart materials such as these, Advincula has compiled an impressive record as a leading polymer, thin films and nanomaterials researcher. In addition to these most recent publications, three other papers were cover stories in top journals in April. In May, he released a new book with Wolfgang Knoll of the Austrian Institute of Technology titled “Functional Polymer Films” that Advincula considers to be akin to an encyclopedia on polymer thin films.

Additionally, Advincula was recently inducted as a fellow of the American Chemical Society (ACS), as well as being named a fellow in two of its technical divisions – the Polymer Chemistry Division and the Polymer Materials Science and Engineering Division. The ACS is the world’s largest scientific society and one of the world’s leading sources of authoritative scientific information. Achieving fellow status is a competitive process, based on research, contribution and service accomplishments to science and society.

“It is a rare distinction to become a triple fellow with the ACS, which has more than 163,000 members,” Advincula said. “With only one out of every 1,000 members qualifying for selection as a fellow, I am extremely honored to achieve this trifecta for my work in advancing polymer and nanomaterial research and applications.”

He asserts that much of this is really a tribute to his research group at UH, saying that his discovery-driven laboratory provides an environment that allows for readily filing patents, authoring publications and mentoring future scholars and inventors. He says the joy of working with students and budding scientists and engineers is reflected in his record of mentoring, with nearly 20 Ph.D. students, 50 undergraduates and dozens of high school students coming through his lab over the years.

“It is an extraordinary achievement to be named a fellow of the ACS and two ACS divisions,” said David Hoffman, professor and chair of the chemistry department in the College of Natural Sciences and Mathematics at UH. “The honors are a reflection of the respect Gobet’s colleagues have for him personally and for his scientific work.”

In addition to his lab research, Advincula has been active in ACS, giving hundreds of presentations, organizing symposia and serving on the editorial advisory board of several scientific journals. He has nine U.S. patents and has authored more than 300 papers. Advincula, who is both a professor of chemistry and chemical engineering, has been continuously funded by the National Science Foundation, Robert A. Welch Foundation and several companies interested in the applications of his work.

About the University of Houston
The University of Houston is a Carnegie-designated Tier One public research university recognized by The Princeton Review as one of the nation’s best colleges for undergraduate education. UH serves the globally competitive Houston and Gulf Coast Region by providing world-class faculty, experiential learning and strategic industry partnerships. Located in the nation’s fourth-largest city, UH serves more than 38,500 students in the most ethnically and culturally diverse region in the country.