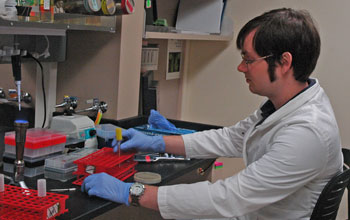 View a video with NSF graduate research fellow Alistair Russell of the University of Washington.

When competing for food and resources, bacteria employ elaborate strategies to keep rival cells at bay. Scientists have now identified a pathway that allows disease-causing bacteria to attack other bacterial cells by breaking down their cell wall.

Pseudomonas aeruginosa is a type of bacteria readily found in everyday environments. It easily forms colonies in a wide variety of settings, including medical devices, body organs and skin wounds. This allows it to cause disease and act as a major pathogen, particularly in hospitals.

Research led by Joseph Mougous, assistant professor of microbiology at the University of Washington in Seattle, provides new insight into how P. aeruginosa acts as a master colonizer and maintains a competitive advantage over other bacteria. The study, which will be published in the July 21 issue of the journal Nature, describes how P. aeruginosa uses a specialized secretion system–the type VI secretion system–to deliver toxic proteins to recipient opponent bacteria. These proteins break down a structural protein known as peptoglycan, which the authors describe as “an Achilles heel of bacteria.” Degrading this target in turn causes the breakdown of the protective cell wall of competitor bacteria. Furthermore, P. aeruginosa protects itself from this attack by using specific, strategically localized immunity proteins that counteract the effects of the toxic proteins it secretes.

This discovery not only sheds light on P. aeruginosa‘s pathogenic success, but is also interesting from an evolutionary perspective as it highlights the functional similarity between the bacterial type VI secretion system and viruses that infect bacteria, or bacteriophages.

This research was supported by the National Institutes of Health, the European Commission within the DIVINOCELL programme, and the National Science Foundation.

For more information regarding this research, view the video sound bites of Alistair Russell, lead author of the research manuscript and National Science Foundation Graduate Research Fellow at the University of Washington.