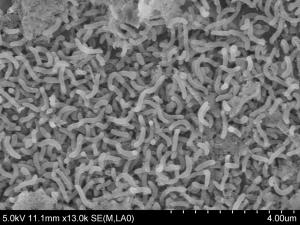 A recent study by researchers at the University of Hawaiʻi at Mānoa and the Oregon State University (OSU) provides strong evidence that mitochondria share a common evolutionary ancestor with a lineage of marine bacteria known as SAR11, arguably the most abundant group of microorganisms on Earth.

“This is a very exciting discovery,” said Michael Rappe, Associate Researcher at the Hawaiʻi Institute of Marine Biology in the School of Ocean and Earth Science and Technology (SOEST) at UH Mānoa.  “The results that we present make sense in a lot of ways: the physiology of SAR11 makes them more apt to be dependent on other organisms, and based on the contemporary abundance of SAR11 in the global ocean, the ancestral lineage may have also been abundant in the ancient ocean, increasing encounters between this bacterial lineage with the host of the original symbiosis event.”

In order to understand the evolutionary history of the SAR11 clade of marine bacteria, colleagues at Oregon State University compared the genomics of mitochondria from diverse supergroups of eukaryotes (including Excavata, Chromalveolata, and Archaeplastida) with the genomics of SAR11 strains isolated by Rappe’s laboratory using several interconnected computer programs.  This approach provided highly sophisticated and thorough phylogenetic analysis of these genomes.

In addition to discovering the evolutionary connection between mitochondria and SAR11, the phylogenomics-based assessment of the diversity of this group (i.e. an assessment based on the entire genome, rather than single genes) provided substantial support for proposing a new family of bacteria, Pelagibacteraceae, fam. nov.  “The implication is that the lineage of highly abundant marine bacteria known as SAR11 contains a significant amount of genetic diversity, which potentially indicates significant diversity in metabolism,” noted Rappe.

Rappe and colleagues at SOEST and OSU continue to grow new strains of SAR11 and probe their genomes to further understand their metabolic potential and how they have become so successful in the global ocean.

This research was funded by the Gordon and Betty Moore Foundation, Marine Microbiology Initiative, as part of its Marine Microbial Sequencing Project; and the U.S. National Science Foundation.