Houston- A team of researchers from the University of Houston (UH) and St. Luke’s Episcopal Hospital (SLEH) are working to develop improved screening methods to detect a potentially lethal, drug-resistant superbug that has made its way to Texas.

Specifically, the research team looked at a multi-drug resistant bacterium called Klebsiella pneumoniae, which is increasingly resistant to most drugs of last resort. Commonly called CRKP, which is short for carbapenem-resistant Klebsiella pneumoniae, the bacteria were found in three patients at St. Luke’s in 2010, and the team published a report about it in 2011 in the journal Diagnostic Microbiology & Infectious Disease. Endemic to the northeastern United States and recently making its way to California, reports of this particular superbug have remained uncommon throughout the majority of the country. The researchers believe these are the first confirmed cases in Texas.

“The key to effective therapy is to identify the infection quickly and accurately, so you can initiate the appropriate measures that will benefit the patient, prevent it from spreading and discourage the development of resistance,” said Vincent Tam, associate professor of clinical sciences at the UH College of Pharmacy and co-author of the report. “The current methods of detection are far from perfect, but following national and international resistance trends, we are being proactive in anticipating problems so we can deal with them when they’re in the initial, budding stage.” 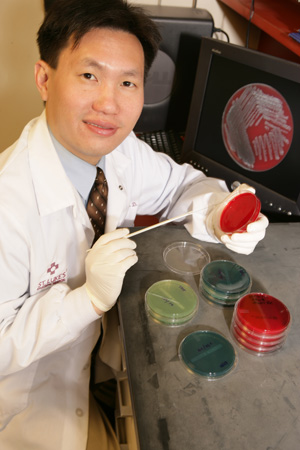 Although it’s virtually impossible to pinpoint when or how this superbug arrived in Texas, researchers are working to determine its prevalence here and to develop strategies to deal with potential outbreaks. The bacteria can cause an array of infections, including pneumonia, bloodstream and urinary tract infections, and are becoming increasingly worrisome for clinicians.

Although Klebsiella pneumoniae is naturally found in the intestinal tract and relatively harmless to healthy individuals, it can lead to potentially deadly infections in people with weakened immune systems, such as patients in ICUs, long-term care facilities or nursing homes. These bacteria, for instance, are resistant to the carbapenem class of antibiotics, which are among the antimicrobials of last resort for this type of bacteria. As a result, clinicians managing the infection are left with few options but to employ more toxic drugs that pose an increased risk of damage to the kidneys or other organs.

The automated systems used in clinical microbiology laboratories can misclassify certain bacteria as being susceptible to carbapenems, potentially leading to inappropriate treatment and unfavorable patient outcomes. More accurate methods for identifying these specific bacteria require time- and labor-intensive processes and are typically only available in research laboratories outside of the clinical setting, such as at the Centers for Disease Control and academic research institutions such as UH.

With support from the Roderick D. MacDonald Research Fund at SLEH, Tam and his collaborators are working to determine the prevalence of CRKP and to employ promising techniques for rapid and accurate detection of these bacteria in the clinical setting, as well as prevent its spread within the health care system. In addition to Tam, who is also an infectious disease clinician at SLEH, the team consisted of former UH colleague Elizabeth Hirsch, who is now at Northeastern University; Kai-Tai Chang, a research associate at UH; and Todd Lasco and Juan-Pablo Caeiro of SLEH.

Editorial Note: High-resolution photos of Vincent Tam in the lab are available to media by contacting Lisa Merkl.

About the University of Houston
The University of Houston is a Carnegie-designated Tier One public research university recognized by The Princeton Review as one of the nation’s best colleges for undergraduate education. UH serves the globally competitive Houston and Gulf Coast Region by providing world-class faculty, experiential learning and strategic industry partnerships. Located in the nation’s fourth-largest city, UH serves more than 38,500 students in the most ethnically and culturally diverse region in the country.

For more information about UH, visit the university’s Newsroom.