Taken together, these studies provide a new understanding of the unique intestinal environment and suggest new strategies for the prevention of inflammatory bowel disease (IBD) and viral infections, the researchers said. 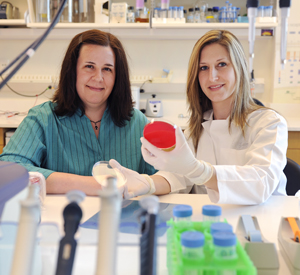 “Mammals have evolved ways to limit invasion by the naturally occurring bacteria that live in their intestines even as viruses have developed strategies to break through those defenses and cause infection,” said Dr. Julie Pfeiffer, assistant professor of microbiology.

Dr. Pfeiffer is senior author of a new study that finds that, even after 100 years, the polio virus has tricks to reveal. It is well known that after oral ingestion and passage through the intestine, poliovirus can move throughout the body and occasionally cause paralysis. Her team showed that the virus uses the body’s natural gut bacteria in order to become more infectious.

In the other study, senior author Dr. Lora Hooper, associate professor of immunology and microbiology and an investigator for the Howard Hughes Medical Institute (HHMI), reported that an antibiotic protein called RegIIIγ acts like a sentry to keep the 100 trillion bacteria that live in the gut from causing digestive havoc, by maintaining a “demilitarized zone” in the layer of mucus that normally covers the inner surface of the intestines.

Bacteria in the intestine normally work to help the body digest and deliver nutrients from food after eating. A 50-micron zone of separation, about half the width of a human hair, lies between the bacteria that live in the gut and the intestinal wall. In addition to mucous, that zone contains biologically active molecules like the protein RegIIIγ that Dr. Hooper’s laboratory discovered in 2006.

Dr. Hooper and her colleagues showed for the first time how the protein works to police the intestinal demilitarized zone, preventing the naturally occurring bacteria from invading the wall of the intestine, where they can cause problems such as IBD.

“If too many bacteria invade this demilitarized zone, you get ramped up production of the protein RegIIIγ and it pushes them back,” Dr. Hooper said.

In people with IBD – in which inflammation and the body’s response to it can result in painful ulcers and bloody diarrhea – the demilitarized zone is compromised and more bacteria come in contact with the intestinal lining, she explained.

The researchers have patented RegIIIγ as a potential antibiotic therapeutic, though further study is needed to determine if the protein could be developed to help people with IBD or related diseases.

In her study, Dr. Pfeiffer found that mice lacking the normal intestinal bacteria had half the death rate from polio as mice with intact gut bacteria. The findings were the opposite of what the researchers had expected because, like most people, they had expected the body’s intestinal bacteria to offer protection from viral diseases as they have been shown to protect against bacterial infection, she explained.

So Dr. Pfeiffer’s research team conducted a series of experiments to validate and expand that finding, all of which backed up the original conclusion. For instance, they found that virus exposed to bacteria could attach to human cells better than virus that lacked bacterial exposure.

Poliovirus is a very wasteful entity, with only about one in 200 viral particles able to cause infection. To determine whether bacteria could make poliovirus more efficient, Dr. Pfeiffer and colleagues incubated viruses in different warm environments to see how long they took to decay.

“Bacteria are literally activating the virus. There is nothing in that test tube that the virus can use for replication, so it must be increasing the viral infectivity,” she said.

But the researchers wanted to delve deeper. They found that two different carbohydrates (polysaccharides) on the bacterial cell surface – lipopolysaccharide (LPS) and peptidoglycan – were able to spike poliovirus infectivity even in the absence of bacteria.

Other UT Southwestern researchers involved in Dr. Pfeiffer’s study were lead author Dr. Sharon Kuss, postdoctoral researcher; Dr. Hooper; Gavin Best, research technician in microbiology; and Chris Etheredge, former research technician in microbiology. Researchers from Vanderbilt University also participated in the study, which was supported by grants from the National Institutes of Health and the Pew Scholars Program of the Pew Charitable Trust.

The research was supported by grants from the National Institutes of Health, the Crohn’s and Colitis Foundation of America, Burroughs Wellcome Fund and the Howard Hughes Medical Institute.