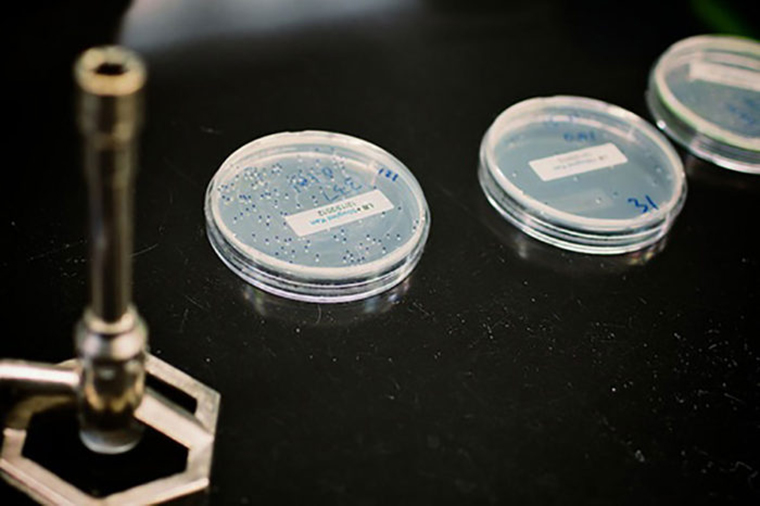 Bacteria are plated in petri dishes in the lab of Gautam Dantas at Washington University School of Medicine in St. Louis. Dantas and his colleagues have identified compounds that block resistance to tetracyclines, an important class of antibiotics. These compounds — tetracycline destructase inhibitors — interfere with the resistance machinery of bacteria capable of destroying tetracycline. (Photo: Pablo Tsukayama

As dangerous bacteria grow more savvy at evading antibiotics, researchers are seeking new ways to counterattack. Rather than design new drugs from scratch, some scientists are searching for ways to block the microbes’ evasive maneuvers. If resistance can be shut down, current drugs should remain effective.

That concept is demonstrated in a new study from Washington University School of Medicine in St. Louis. The researchers discovered compounds that block resistance to a major class of antibiotics called tetracyclines. If developed into a drug, such a compound could be given in combination with a tetracycline, should the infection become resistant to tetracycline alone. These types of compounds do not have a direct antimicrobial effect — if given alone, they would not kill bacteria. Instead, they knock down the bacteria’s ability to survive treatment with specific antibiotics.

The research, performed in bacteria grown in the lab, is published May 8 in the journal Nature Chemical Biology.

“These compounds inhibit the ability of tetracycline-resistant bacteria to destroy tetracycline,” said co-senior author Gautam Dantas, an associate professor of pathology and immunology. “We’re gunking up the resistance machinery of bacteria capable of destroying tetracycline. If these bugs can’t chew up this antibiotic anymore, they are re-sensitized to the effects of the drug.”

Despite tetracyclines’ widespread use, bacterial infections have not yet demonstrated aggressive resistance to these drugs via destruction mechanisms. Some bacteria are resistant to tetracyclines through other means, such as pumping the drug out of the cell or blocking the drug from reaching its target, but these strategies are not as effective as destroying the drug entirely. Dantas said conditions are favorable for this destructive type of resistance to ramp up.

The researchers discovered these resistance inhibitor compounds by first conducting genetic surveys of bacteria living in soils from different parts of the country; they were interested in understanding the extent of antibiotic resistance present in bacteria living in the environment. Using a genomic technique that Dantas’ laboratory helped develop, the researchers previously had isolated small fragments of bacterial DNA from soils and screened those pieces for genes that can confer antibiotic resistance in infectious bacteria. These studies demonstrated that soil bacteria are packed with genes that — if transferred into disease-causing bacteria — would allow that bacteria to survive treatment with many common antibiotics.

According to Dantas, one set of genes stood out because the researchers could not find these sequences listed in any genomic database, and these novel genes allowed bacteria to break down tetracycline antibiotics, a problem that has not yet occurred in the many patients treated with tetracyclines.

While the genes are not yet widely present in bacteria causing infections, Dantas and his team determined the genes were at high risk of spreading because of tetracyclines’ widespread use and the fact that even appropriate antibiotic use favors survival of resistant bacteria. In addition, some of the newly discovered resistance genes were located near sections of the bacterial genome known to be capable of jumping between even distantly related bacteria. The resistance genes enable the bacteria to manufacture proteins the researchers dubbed tetracycline destructases because of their ability to break apart tetracycline.

Dantas formed partnerships with co-senior authors Timothy A. Wencewicz, an assistant professor of chemistry, and Niraj H. Tolia, PhD, an associate professor of molecular microbiology, to determine how these destructases work and develop inhibitors that interfere with their ability to break apart tetracycline. Dantas pointed out the importance of collaborations across disciplines to tackle the complex problem of antibiotic resistance. In this case, the researchers are combining expertise in genetics, chemistry, structural microbiology and big data analysis to design inhibitors of tetracycline destructases.

Bacteria carrying tetracycline destructases are not yet at the level of danger posed by superbugs such as carbapenem-resistant Enterobacteriaceae (CREs), but their resistance strategies work in similar ways in terms of the ability to destroy an antibiotic. Last year, a CRE infection resistant to all available antibiotics led to the death of a Nevada woman with a recent history of hospitalizations outside the United States.

Targeting resistance has had success in some bacterial infections that have become resistant to another important class of drugs called beta-lactams, which includes penicillin. Tetracycline destructase inhibitors would serve a similar function to beta-lactamase inhibitors. These inhibitors often have been developed alongside their associated beta-lactam drugs and have helped some beta-lactams regain their effectiveness.

Emphasizing the timeliness of the research, Dantas said there is evidence these tetracycline destructase resistance genes are beginning to ramp up the threat to patients with bacterial infections.