New insights into the toxin behind tetanus

Tetanus toxin is the neurotoxin that causes lockjaw. Many are vaccinated, but tetanus still kills tens of thousands of people per year worldwide. Researchers from the Department of Biochemistry and Biophysics, led by Dr Pål Stenmark, have now uncovered the poison’s structure. For the first time, the way the poison is constructed has been revealed. 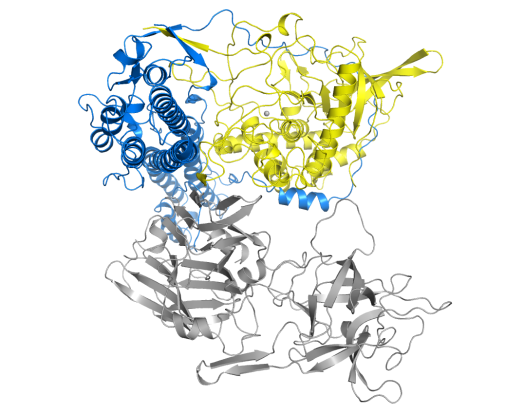 For the first time, the way the poison Tetanus toxin is constructed has been revealed. Photo: Geoffrey Masuyer och Pål Stenmark

“Our discovery could be used to design new medicines”, says Pål Stenmark, Associate Professor at the Department of Biochemistry and Biophysics, Stockholm University.

Dr Stenmark and his research team have determined the three-dimensional structure of the entire tetanus toxin protein.

“We can now see the exact positions of the 20 000 atoms that build up the tetanus toxin. It means that we can see how both the toxin and vaccine actually look. Botulinum neurotoxins and the tetanus toxin are the deadliest toxins known to man. The toxins are large proteins that are made by specialised bacteria. The bacteria that produce the tetanus toxin are found in common soil and flourish in untended wounds. One unusual feature of the tetanus toxin is that it travels in nerve cells to the spinal cord from where it can cause life-threatening cramping and spasms.”

These start with the shorter nerves in the face (lockjaw) and move on to cause spasms violent enough to break bones.

“We discovered that the poison takes on different forms depending on pH – it appears one way in acidic liquids and very different in a neutral pH environment. We believe that this is important for the toxins ability to move from the wound to the spinal cord and to adapt to different environments. Before this research, no one knew what the toxin looked like or that it changed structure depending on pH.”

Pål Stenmark’s research group also studies the botulinum neurotoxins, which are similar to the tetanus toxin, but causes paralysis instead of spasms and cramping.

“We want to know more about why these two poisons have nearly opposite effects – tetanus toxin travels through nerve cells to the spinal cord and cause severe muscle cramps whereas the botulinum neurotoxin stays put and causes paralysis. Our findings could be useful in creating new medicines that could be transported to the brain”, says Pål Stenmark.

“People are not vaccinated against tetanus in many parts of the world, and infants and new mothers are particularly at risk. Large international vaccination programs have dramatically improved the situation, but tens of thousands of people still die of tetanus every year.”