The mosquito-borne virus can harm fetuses in utero and cause the brain condition microcephaly. Now, scientists have identified a genetic pathway that’s targeted by Zika and revealed one protein’s role in brain development. 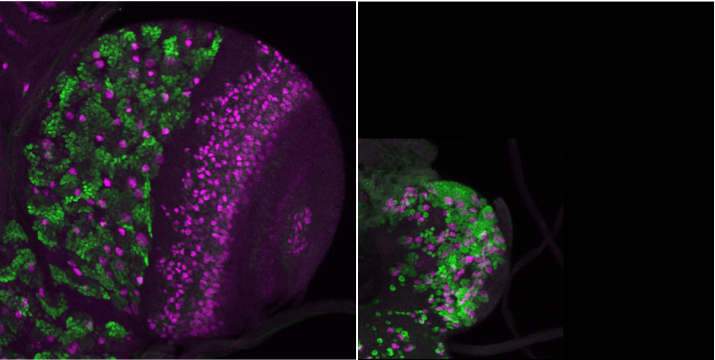 By replicating human patients’ mutations in flies, researchers have uncovered one way that Zika virus leads to microcephaly, a congenital condition resulting in a smaller-than-normal head and developmental delays. The new work, published November 14, 2019, in the journal Developmental Cell, identifies a set of genes involved in microcephaly. One of these genes codes for a protein that’s targeted during Zika virus infection.

Zika virus is transmitted by mosquitoes and, in healthy adults, generally causes mild symptoms. But when pregnant women are infected, the virus can have lifelong consequences for the fetus, including developmental abnormalities like microcephaly. Zika, previously a rare disease, became an international concern during a large outbreak that began in 2015.

“What’s interesting is that this set of genes was known in flies for more than 15 years and was never associated with microcephaly.”

Bellen and his colleagues didn’t set out to study Zika. In the course of a larger project, his team noticed that flies with a mutation in a gene called Ankle2 ended up with smaller-than-usual brains – a Drosophila manifestation of microcephaly. Then, in a database of patients with rare genetic mutations, they found patients with Ankle2 mutations who had severe cases of microcephaly from unknown causes. That was a sign that Ankle2 mutations might be relevant in human diseases that affect brain development, says study coauthor Nichole Link, a geneticist and developmental biologist in Bellen’s lab.

To figure out how Ankle2 mutations were influencing brain formation, the researchers went back to flies. Normally, Ankle2 works with a series of other genes to control the division of neuroblasts, stem cells that give rise to neurons. These cells are crucial for proper brain development. Mutations in the Ankle2 gene, though, messed with neuroblast division. Larval flies with the mutation had fewer neuroblasts and smaller-than-expected brains.

“What’s interesting is that this set of genes was known in flies for more than 15 years and was never associated with microcephaly,” says Bellen.

Now, though, these genes have new relevance. Last year, Bellen’s team, working with Nevan Krogan’s team at the University of California, San Francisco, identified a protein produced during Zika virus infection that blocks the proper activity of the Ankle2 protein. In the new work, the researchers have shown in more detail how that interaction harms brain development – by preventing neuroblasts from dividing correctly.

The find is part of a bigger initiative between Bellen’s lab and other scientists at Baylor and beyond, in which researchers use flies to study mutations found in patients with undiagnosed diseases. The work can help scientists learn more about an individual mutation’s functional effects. And sometimes, as with microcephaly caused by Zika, a rare mutation can illuminate the mechanism of a more common disease, Link says.

This paper was originally published as a preprint on bioRxiv.