Ann Arbor, Mich. – A new combination of investigational drugs successfully suppressed hepatitis C genotype 1 infection in a high percent of patients who had not responded to previous treatment in a study led by a University of Michigan hepatologist. 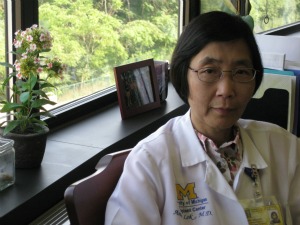 The study, which will be published Jan. 19 in the New England Journal of Medicine, focused on hepatitis C genotype 1, which is predominant in the United States and the most difficult to treat. Hepatitis C is a virus that infects the liver and can cause liver cancer and liver cirrhosis. It is transmitted through direct contact with infected blood and blood products.

In this pilot study, patients with hepatitis C genotype 1 infection, who had not responded to previous treatment with PEG-interferon alfa and ribavirin, were given a combination of two investigational direct-acting antiviral agents (daclatasvir and asunaprevir) alone, or were given these two antiviral agents along with PEG-interferon alfa-2a and ribavirin. All the patients saw their hepatitis C viral load drop rapidly, says Anna S. Lok, M.D., professor of Internal Medicine, Division of Gastroenterology at the University of Michigan Medical School and lead author of the study.

“The two recently approved hepatitis C drugs – telaprevir or boceprevir — combined with PEG-interferon alfa and ribavirin have limited success in patients who have not responded to previous treatment with PEG-interferon alfa and ribavirin. Because of this high unmet medical need, there is a necessity for new combination regimens that can increase response rates in that population,” says Lok, who also is Director of Clinical Hepatology at U-M. “The high rate of sustained virologic response in patients who received the four drug regimen is very exciting. Although only four of 11 patients given the two direct-acting antiviral agents only achieved sustained virologic response, this is the first study to show that sustained virologic response can be achieved without the use of interferon or ribavirin. These data are very encouraging because PEG-interferon alfaand ribavirin are associated with many side effects and many patients with hepatitis C choose not to receive treatment for fear that they cannot tolerate those drugs.”

In the Phase II clinical trial, Lok, along with a team of researchers including scientists from Bristol-Myers Squibb, studied patients with Hepatitis C genotype 1, who had not responded to prior therapy with PEG-interferon alfa and ribavirin. The study was funded by Bristol-Myers Squibb.

In this study there were no serious adverse events on treatment or discontinuations due to adverse events. Diarrhea was the most common adverse event in both groups, but it was mild or moderate in all cases.

About U-M’s Division of Gastroenterology: U-M is one of the largest gastroenterology practices in the country and is a leader in the prevention, diagnosis, and treatment of diseases of the gastrointestinal tract and liver. Our 50-plus physicians are experts in the diagnosis and treatment of all diseases of the gastrointestinal system, from simple to complex, including those of the esophagus, stomach, small intestine, colon, rectum, liver, gallbladder, pancreas and biliary tract.