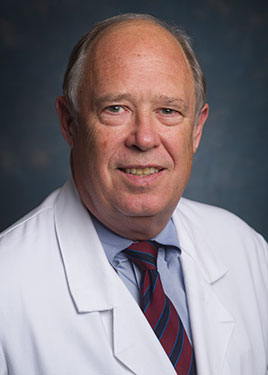 More than 36 million cases of gonorrhea are reported worldwide each year, and the infection is steadily becoming more resistant to currently available drugs.

“There is a huge need for alternative medicines,” said Edward W. Hook III, M.D., director of the UAB Division of Infectious Diseases in the Department of Medicine and of the STD Research Program.

Hook presented the findings of this new antibiotic known as Solithromycin at the recent European Congress of Infectious Diseases in Berlin, Germany, April 28. Hook believes the findings could lead to a much larger trial in the near future.

“The findings represent a preliminary step in the process of developing new therapies for gonorrhea,” Hook said. “They are exciting because gonorrhea remains a major global health care problem, and more people are steadily reporting resistance to currently available treatments each year. The results of this trial suggest we have an opportunity to work with a new class of antibiotics to expand the drugs available for gonorrhea treatment. The fact that 29 infection sites from 22 people were 100 percent cured in this Phase II trial is strong evidence for work to move forward with further, larger studies.”

Ceftriaxone is currently the only drug recommended for therapy in the United States, but, in addition to increasing resistance, some estimates put allergy to this and other drugs in the cephalosporin class of antibiotics to be up to 10 percent of the population. The drugs related to cephalosporin antibiotics include the popular infection-killer penicillin.

UAB’s long-standing collaborative efforts with the JCDH — and the national and international recognition they have received for excellence in research – led to the university being selected to do the first Phase II trial of Solithromycin in humans for gonorrhea therapy by the drug’s developers, Cempra Pharmaceuticals of Chapel Hill, N.C.

“We consider UAB’s Division of Infectious Disease to be one of our most significant partners in the management of patients with infectious diseases, particularly STDs and tuberculosis,” said Bryn Manzella, JCDH director of quality improvement and Academic Health Department coordinator. “They have brought to us the ability to have cutting-edge research. Our patients have sometimes been the very first to be able to receive treatment that ends up really changing the world and changing the way care is given for those diseases.”

Alabama’s high prevalence for gonorrhea, particularly in Jefferson County, was a factor in UAB’s selection by Cempra.

This is why UAB’s long-standing partnership with the JCDH is so vital, Hook says. Five UAB physicians and their co-workers see 15 to 20 percent of the patients seen at the health department each year. The relationship has likely kept the numbers for gonorrhea and other STDs lower than they would be otherwise, and it has given many of the county’s underprivileged early access to the newest and best therapies and diagnostic tests in the United States.

Another example of this benefit is in the treatment of chlamydia, a dangerous STD that had the largest number of reported cases ever to the CDC in 2011, with a total of 1,412,791 incidents. The JCDH STD Clinic was the first STD clinic in the Alabama to offer routine chlamydia testing, and it was offered for free.

“For the first decade of this relationship, we provided literally thousands of free tests for patients attending the STD clinic,” Hook says. “Those are patients who wouldn’t be seen or would have to be seen at a later date if our clinicians, funded by UAB and these research efforts, were not there.”

UAB physicians collect specimens and recruit patients for studies at the clinic and at UAB in the context of usual care. The partnership allows JCDH patients access to the most cutting-edge treatments, as well as gives them the added satisfaction of contributing to scientific discovery and advancement.

Hook says virtually every new diagnostic test for sexually transmitted infections, including gonorrhea, chlamydia and trichomoniasis, have been evaluated at the JCDH and UAB.

“We see and treat patients, and if the patients agree to be in our studies, they are included,” Hook said. “The patient gets the best available care, and the world benefits.”

The CDC often commends the work of UAB’s infectious disease faculty on the treatment of STDs. In fact, three STD research program faculty members – Professor Jane Schwebke, M.D., Associate Professor William Geisler, M.D., and Hook – were invited to the CDC earlier this month to participate in a revision of the CDC/STD Treatment Guidelines.

The Division of Infectious Diseases also is routinely represented at CDC, World Heath Organization and National Institutes of Health meetings.

The partnership has enabled both entities to further broaden their areas of expertise, and it has led to other opportunities to help those in need. For example, the CDC has funded a Sexually Transmitted Disease/HIV Prevention Training Center that is jointly run by UAB and the JCDH for most of the past 20 years. The program trains clinicians across the southeastern United States in sexually transmitted disease management and care.

“Sometimes clinicians come here for the training, and other times our faculty goes to them,” Hook said. “A large part of the experiential training is provided at the JCDH, and there is a ripple effect for the state and Southeast that comes out of that.”

Because public health interventions for persons with and at risk for sexually transmitted infections are largely underfunded, Manzella says it is critical for public health to have strong partnerships with academia.

“It’s important for those of us practicing in the field to have the breadth of knowledge and current innovations UAB can provide because it is on the cutting edge in its research efforts,” Manzella says. “It’s a privilege to be able to partner with UAB, provide innovative care to our patients and conduct the research that creates the next best thing.”