Cracking the Code of HIV; Providing An Up-Close View of the Enemy 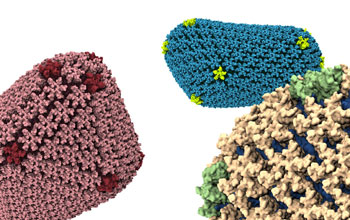 Researchers have determined the precise chemical structure of the HIV capsid, a protein shell that protects the virus’s genetic material and is a key to its ability to infect and debilitate the human body’s defense mechanism. Detailed simulations were achieved with the use of a supercomputer on a 64 million atom sample. The capsid has become an attractive target for the development of new antiretroviral drugs that suppress the HIV virus and stop the progression of AIDS.

The research paper describing these results is the cover story of this week’s journal Nature (May 30, 2013).

This discovery was enabled by a recently-dedicated, new supercomputer called Blue Waters, one of the world’s most powerful computers. Until the arrival of petascale supercomputers, scientists were unable to decipher in atomic-level detail the entire HIV capsid–an assemblage of more than 1,300 identical proteins forming a cone-shaped structure. The simulations that added the missing pieces to the puzzle were conducted during testing of Blue Waters at the National Center for Supercomputing Applications at the University of Illinois at Urbana-Champaign (UIUC).

“The sustained petascale performance of Blue Waters is precisely what enabled these talented researchers to explore new methods combined with structural and electron microscopy data to reliably model the chemical structure of the HIV capsid in great detail,” said Irene Qualters, NSF program manager for Advanced Cyberinfrastructure. “This knowledge will allow researchers to infiltrate that membrane with HIV-fighting drugs.”

A video, Targeting the HIV Virus: Researchers Use Supercomputer to Solve the Structure, tells the story of this research.

More information is available in the UIUC press release, Wit, Grit and a Supercomputer Yield Chemical Structure of HIV Capsid.

The National Science Foundation (NSF) is an independent federal agency that supports fundamental research and education across all fields of science and engineering. In fiscal year (FY) 2012, its budget was $7.0 billion. NSF funds reach all 50 states through grants to nearly 2,000 colleges, universities and other institutions. Each year, NSF receives about 50,000 competitive requests for funding, and makes about 11,500 new funding awards. NSF also awards about $593 million in professional and service contracts yearly.