ANN ARBOR, Mich. — For the millions of people suffering from the intensely red, horribly itchy skin condition known as eczema, the only thing more maddening than their disease is the lack of understanding of what causes it, or makes it flare up from time to time. 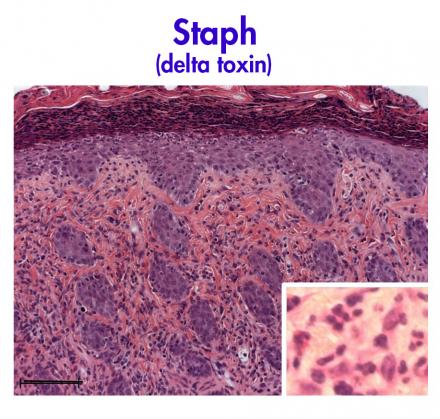 Now, a new finding made by University of Michigan Medical School researchers and their colleagues may bring that understanding closer – and could help lead to better treatments.

In a paper published online in Nature, the team reports that a toxin produced by the common bacteria Staphylococcus aureus – popularly known as “staph” – causes immune-system cells in the skin to react in a way that produces eczema-like rashes.

The release of the molecule, called delta toxin, by staph bacteria caused immune-related mast cells in the skin to release tiny granules that cause inflammation. But this didn’t occur when skin was exposed to staph strains that lacked the gene for delta toxin. 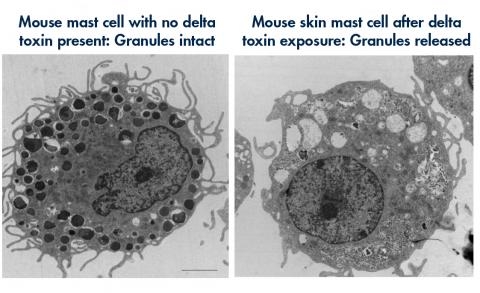 The researchers showed that delta toxin from staph bacteria caused immune-system cells called mast cells to “degranulate” — or release granules that trigger inflammation. These electron microscope images clearly show the difference between mast cells with and without delta toxin exposure.

This link between a specific S. aureus toxin and mast cell degranulation suggests a very specific mechanism, though it’s not enough to suggest delta toxin from staph bacteria by itself causes eczema, says senior author and U-M professor Gabriel Nunez, M.D. Genetic vulnerability likely also plays a role, he says.The finding was made in mice, so it’s too soon to say that the same effect occurs in humans who suffer from eczema, also called atopic dermatitis. But the researchers did find significant levels of staph delta toxin in skin samples taken from patients with eczema.

Nunez, lead author Yuumi Nakamura, M.D., Ph.D., co-author Naohiro Inohara, Ph.D., and their colleagues hope their finding provides a new avenue for developing treatments to help the 15 to 30 percent of children, and 5 percent of adults who have eczema. 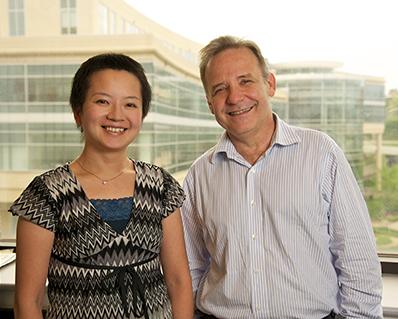 Yuumi Nakamura, M.D., Ph.D., and Gabriel Nuñez, M.D., the lead and senior authors of the new research on eczema and staph infections.

Some – including patients – have previously noted that eczema patients who take antibiotics for other conditions experience a lessening of eczema symptoms. But antibiotics have many drawbacks as long-term therapies for a chronic condition such as eczema – most of all, the threat of contributing to the already serious issue of multi-drug resistant Staphylococcus aureus, or MRSA.

The research was funded by the National Institutes of Health, and involved NIH researchers who study S. aureus. Nunez notes that the initial hint of a link came totally by chance, as an incidental finding in an unrelated mast cell study they were conducting. They zeroed in on the little-understood delta toxin and began exploring its power to provoke mast cells to cause inflammation.

“We know that 90 percent of patients with atopic dermatitis, also called eczema, have staph bacteria detectable on their skin,” says Nunez, who is the Paul de Kruif Professor of Academic Pathology. “But until now, it has not been suspected that the contribution was primary, because there was not a clear mechanistic link. Now we have evidence that there may indeed be a direct link.”

The challenge, he says, will be to test ways to inhibit the effects of delta toxin, so that mast cells don’t get provoked and inflammation doesn’t occur – but to do it in a way that won’t cause resistant bacteria to evolve.

These images show the eczema-like inflammation caused by the application of Staphylococcus aureus bacteria to mouse skin (center) compared with a non-staph control and application of staph bacteria that lacked the ability to make delta toxin (right).

Getting to the origin

Part of the exciting challenge presented by this new discovery, Nunez says, is simply learning more about what delta toxin does and why the bacteria produce it.“This bacterium is everywhere, but very little is known about the delta toxin,” Nunez explains. “The bacteria do not likely produce it to cause disease, but produce it in response to an increase in neighboring bacteria – something called quorum sensing.”

The gene for the toxin is regulated through a cellular pathway that’s responsible for S. aureus’s virulence, or ability to cause disease. The staph bacteria may produce delta toxin to kill other competing bacteria that reside on the skin – including benign and beneficial ones.

So, the toxin may have to do with that kind of “battle” between microscopic organisms fighting for a niche on the host body. “Perhaps the host – the human – gets involved in the middle of the war,” Nunez speculates. “And eczema is the collateral damage of the bacteria producing the delta toxin factor to cause colonization, and aggravating host mast cells.” Further research will be needed to find out.

This kind of research is what U-M’s new Host Microbiome Initiative is all about. Nunez is one of dozens of U-M faculty from many disciplines who have come together to study the interplay between bacteria and other microscopic organisms, and different aspects of the human body and disease. With new funding from the Medical School’s Strategic Research Initiative, they will accelerate their research in coming months and years.

Nunez and his colleagues have filed for a patent on the discovery through U-M Tech Transfer, which is actively seeking commercialization partners.

Authors: Nakamura is now at Chiba University in Japan. Other authors were Jon Oscherwitz and Kemp B. Cease of U-M and the VA Ann Arbor Healthcare System; Susana M. Chan, Raul Munoz-Planillo and Mizuho Hasegawa of U-M; NIH researchers Michael Otto, Amer E. Villaruz and Gordon Y. C. Cheung from the Laboratory of Human Bacterial Pathogenesis at the National Institute of Allergy and Infectious Diseases; Martin J. McGavin of the University of Western Ontario; and Jeffrey B. Travers of the Indiana University School of Medicine.