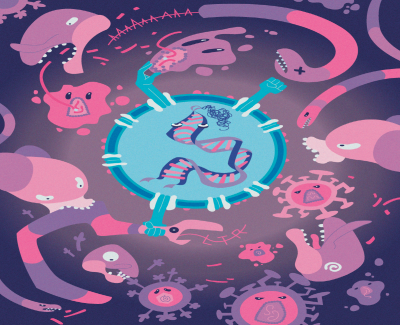 Conflict in the eukaryotic cell. Illustration by Teny Issakhanian

Far from being sleekly performing and fine-tuned athletes, the molecules guiding the activity of our genes are like sour bureaucrats that clog up the works and create unnecessary inefficiency, asserts Hiten Madhani, MD, PhD, a professor of biochemistry and biophysics at UCSF. In contrast, bacteria carry out these processes efficiently with less frustration for the gene to express itself.

Madhani presented his viewpoint in an essay entitled “The Frustrated Gene: Origins of Eukaryotic Gene Expression,” published online Nov. 7 in the journal Cell.

Although his thinking was stimulated by his own research findings, Madhani described his Cell essay as a “just so” story, a conjecture that challenges conventional thinking, but that so far is without data to back it up.

He paraphrased a source of inspiration, the renowned scientist Sydney Brenner, who won a Nobel Prize for his own studies of gene regulation: “Biology is awash in a sea of data, but it needs new theories,” Madhani said.

Parasitic DNA May Be Driver of Eukaryotic Evolution

Most scientists believe that the complexity of the molecular mechanisms that guide the expression of genes and the production of proteins within a human cell is needed to allow for flexible responses that drive the development and maintenance of multifaceted organisms, Madhani said.

But he proposes that this complexity in genetic regulatory machinery did not originally evolve to allow for the development of the whole human. Instead, he suggested, complexity in gene expression might have first evolved in early eukaryotes to thwart infection by “parasitic DNA,” such as retroviruses, that would otherwise invade the cell nucleus and disrupt normal genes.

In contrast to humans, bacteria control their genes and have adaptively evolved in myriad ways without complex mechanisms like those that guide human gene expression. In fact, humans, whose cells number in the many trillions, and disease-causing bacteria, which are but a single cell, have been doing battle and evolving together for ages, with multidrug-resistant bacteria perhaps being latest type of villain to emerge in this epic struggle.

Bacteria have persisted despite their simplicity. They have only one gene-bearing chromosome and lack any kind of cell nucleus. The bacterial chromosome itself lacks the modifiable, protective sheath known as chromatin. Many other details of gene expression differ between human and bacterial cells. Bacteria are known as “prokaryotes,” a name that refers to the fact that they arose before cells evolved that had a nucleus – more than 3 billion years ago, according to some estimates made from fossils. Human cells have a nucleus and numerous other features that peg them as “eukaryotes.”

While humans evolved from apes just a few million years ago, eukaryotes have been around since the ancestors of single-celled yeast arose, perhaps 1.5 billion years ago – with the same complex features, Madhani said.

“It might be tempting to think that the complex attributes of human gene expression evolved to drive the evolution of complex, multicellular organisms,” Madhani said, “But the core elements of eukaryotic gene expression were established within the ancient unicellular progenitor of modern eukaryotes.” In other words, the early eukaryotic cell already was adapting to ward off parasitic DNA, he suggested.

Madhani said his idea stems from research he published earlier this year. His research group discovered that a eukaryotic cellular machine known as SCANR plays a previously unrecognized role in thwarting corruption of the genome by parasitic DNA.

SCANR guards against DNA called jumping genes, or transposons, which long ago invaded the human genome. Transposons replicate multiple times, and insert themselves at random places within genomic DNA. When transposons insert themselves in the middle of an important gene, they may cause malfunction, disease or birth defects.

Madhani began thinking about how other mechanisms in the cell might similarly stymie certain viruses, which unlike bacterial pathogens, depend on the genetic machinery of their human hosts in order to replicate.

In addition to the chromatin that restricts access to DNA, eukaryotic cells also have embellishments to their RNA, and molecular inspectors that check to see that these eukaryotic modifications are present before protein production proceeds. The nucleus itself is gated to allow only certain molecules to get in and out. Many other eukaryotic cellular phenomena might have first evolved to defend against viruses and transposable elements, Madhani said.