Novel Virus Discovered in Half the World's Population 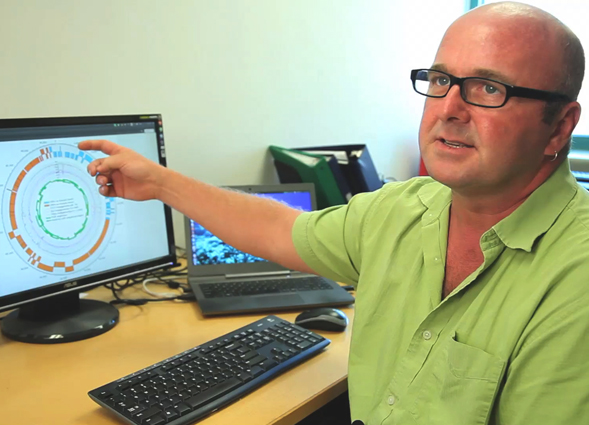 The virus, named crAssphage, has about 10 times as many base pairs of DNA as HIV.
By Michael Price

Odds are, there’s a virus living inside your gut that has gone undetected by scientists for decades. A new study led by researchers at San Diego State University has found that more than half the world’s population is host to a newly described virus, named crAssphage, which infects one of the most common types of gut bacteria, Bacteroidetes. This phylum of bacteria is thought to be connected with obesity, diabetes and other gut-related diseases. The research appears today in Nature Communications.

Robert A. Edwards, a bioinformatics professor at SDSU, and his colleagues stumbled upon the discovery quite by accident. Working with visiting researcher and corresponding author on the study Bas E. Dutilh, now at Radboud University Medical Center in The Netherlands, the researchers were using results from previous studies on gut-inhabiting viruses to screen for new viruses.

In the DNA fecal samples from 12 different individuals, they noticed a particular cluster of viral DNA, about 97,000 base pairs long, that the samples all had in common. When Edwards and his colleagues checked this discovery against a comprehensive listing of known viruses, they came up empty.

The researchers then screened for the virus across the database of the National Institute of Health’s Human Microbiome Project (HMP), and Argonne National Laboratory’s MG-RAST database, and again found it in abundance in samples derived from human feces.

To prove that the viral DNA they discovered in their computer data actually exists in nature, fellow SDSU virologist John Mokili used a technique known as DNA amplification to locate the virus in the original samples used to build NIH’s database.

“So we have a biological proof that the virus they found with the computer actually exists in the samples,” Mokili said.

This was a new virus that about half the sampled people had in their bodies that nobody knew about.

“It’s not unusual to go looking for a novel virus and find one,” Edwards said. “But it’s very unusual to find one that so many people have in common. The fact that it’s flown under the radar for so long is very strange.”

The fact that it’s so widespread indicates that it probably isn’t a particularly young virus, either.

“We’ve basically found it in every population we’ve looked at,” Edwards said. “As far as we can tell, it’s as old as humans are.”

He and his team named the virus crAssphage, after the cross-assembly software program used to discover it.

Some of the proteins in crAssphage’s DNA are similar to those found in other well-described viruses. That allowed Edwards’ team to determine that their novel virus is one known as a bacteriophage, which infects and replicates inside bacteria—and using innovative bioinformatic techniques, they predicted that this particular bacteriophage proliferates by infecting a common phylum of gut bacteria known as Bacteriodetes.

Bacteriodetes bacteria live toward the end of the intestinal tract, and they are suspected to play a major role in the link between gut bacteria and obesity. What role crAssphage plays in this process will be a target of future research.

Further details about crAssphage have been difficult to come by. It’s unknown how the virus is transmitted, but the fact that it was not found in very young infants’ fecal samples suggests that it is not passed along maternally, but acquired during childhood. The makeup of the viral DNA suggests that it’s circular in structure. Further laboratory work has confirmed that the viral DNA is a singular entity, but it’s proven difficult to isolate.

“We know it’s there, but we can’t capture it quite yet,” Edwards said.

Once the virus is isolated, he hopes to delve into its role in obesity. It’s possible the virus in some way mediates the activity of Bacteriodetes colonies, but whether crAssphage promotes or suppresses obesity-related processes in the gut remains to be seen.

The virus might also be used to prevent or mitigate other diseases affected by the gut such as diabetes and gastroenterological maladies.

Once these processes are better understood, Edwards envisions one day the possibility of personalized medicine based on this virus.

“This could be a key to personalized phage medicine,” he said. “In individuals, we could isolate your particular strain of the virus, manipulate it to target harmful bacteria, then give it back to you.”

In addition to Edwards, SDSU researchers Katelyn McNair, Savannah Sanchez, Genivaldo G.Z. Silva, Lance Boling, Jeremy J. Barr, Victor Seguritan, Ben Felts, and Elizabeth A. Dinsdale worked on the project, in collaboration with Argonne National Laboratory in Illinois. The study’s corresponding author, Bas E. Dutilh, shares an affiliation with SDSU, Radboud University Medical Center in The Netherlands, and the Federal University of Rio de Janeiro in Brazil. Contributing researcher Ramy K. Aziz shares an affiliation with SDSU and Cairo University in Egypt. Contributing researcher Noriko Cassman was at SDSU during the time of the study and now is at the Netherlands Institute of Ecology.

San Diego State University is a leading institution for bacteriophage research. Its Viromics Information Institute, which has been identified as an SDSU Area of Excellence, is led by biology professors Forest Rohwer, Anca Segall, Edwards and Dinsdale, and takes a cross-disciplinary approach to learning more about bacteriophages and exploring their potential for medical usage.