Home » Infections » Mapping Human Disease: ‘Not All Pathogens Are Everywhere’

The findings show that the world can be separated into seven regions for vectored human diseases – diseases that are spread by pests, like mosquito-borne malaria – and five regions for non-vectored diseases, like cholera. 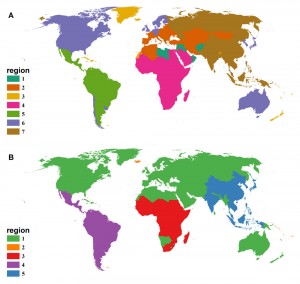 Interestingly, not all of the regions are contiguous. The British Isles and many of its former colonies, such as the United States and Australia, have similar diseases and are classified in the same vectored and non-vectored regions. But Britain’s former colonies in Africa and Asia contain different diseases and therefore are located in differing regions, suggesting that colonization is just one of a variety of factors, like climate and socio-political status, affecting the prevalence of disease in a specific area.

“This is about more than just the movement of people – climate, history and geography all seem to be important factors in how diseases survive and thrive across the globe,” said Michael Just, an NC State Ph.D. student in plant and microbial biology and lead author of a paper describing the research. “Understanding that not all pathogens are everywhere could have consequences for public health and the global society as a whole.”

The researchers examined the world’s 229 countries for the presence or absence of 301 diseases – 93 vectored and 208 non-vectored. It found two more vectored-disease regions than non-vectored disease regions, which is likely due to the fact that the vectors – the pests that carry disease – sometimes have limited mobility. Think of a warm-weather pest that can’t handle the cold, like the mosquito.

“Researchers have mapped humans, animals and plants and their movement and evolution across the globe, but the things that live on or with us – pests and pathogens, for example – have been largely ignored,” Just said. “This study is a good first step in examining the relationship between people and their pathogens, which could have important human health implications.”

Note: An abstract of the paper follows.

“Global biogeographic regions in a human-dominated world: the case of human diseases”

Abstract: Since the work of Alfred Russel Wallace, biologists have sought to divide the world into biogeographic regions that reflect the history of continents and evolution. These divisions not only guide conservation efforts, but are also the fundamental reference point for understanding the distribution of life. However, the biogeography of human-associated species—such as pathogens, crops, or even house guests—has been largely ignored or discounted. As pathogens have the potential for direct consequences on the lives of humans, domestic animals, and wildlife it is prudent to examine their potential biogeographic history. Furthermore, if distinct regions exist for human-associated pathogens, it would provide possible connections between human wellbeing and pathogen distributions, and, more generally, humans and the deep evolutionary history of the natural world. We tested for the presence of biogeographic regions for diseases of humans due to pathogens using country-level disease composition data and compared the regions for vectored and non-vectored diseases. We found discrete biogeographic regions for diseases, with a stronger influence of biogeography on vectored than non-vectored diseases. We also found significant correlations between these biogeographic regions and environmental or socio- political factors. While some biogeographic regions reflected those already documented for birds or mammals, others reflected colonial history. From the perspective of diseases caused by pathogens, humans have altered but not evaded the influence of ancient biogeography. This work is the necessary first step in examining the biogeographic relationship between humans and their associates.