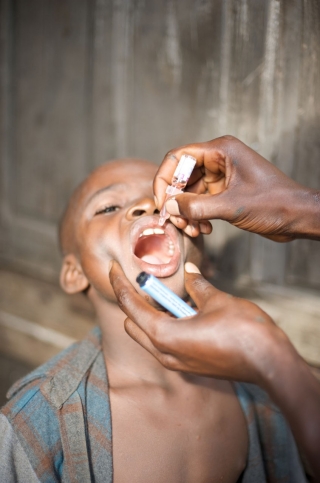 The oral version of the polio vaccine gives better intestinal immunity than the injected vaccine, a boon in areas where people are often exposed to sewage. But because it’s made with live strains, there is a risk that the virus could escape.
Julien Harneis/Wikimedia Commons

Polio is about to be eradicated. By 2018, if all goes according to the World Health Organization’s plans, the last diagnosis of paralytic polio would mark the end of the devastating, potentially fatal illness.

But beyond the geopolitical hurdles, polio fighters also face an unprecedented scientific challenge: the danger of circulating vaccine-derived polioviruses, which originate from one of the two vaccines used against the illness. First recognized in 2000, the viruses are garnering increased attention from researchers as they threaten to overtake wild poliovirus as the most prominent source of the paralytic disease. Several scientists, including Yvonne Maldonado, MD, professor of pediatrics and of health research and policy at the School of Medicine, are studying how to tackle this problem. Maldonado is also chief of infectious diseases at Lucile Packard Children’s Hospital Stanford.

Circulating vaccine-derived polioviruses are “the biggest surprise” that scientists have encountered in their work to end polio, said Walter Orenstein, MD, lead author of a 2014 clinical report about polio eradication from the American Academy of Pediatrics and a professor of medicine at Emory University. The viruses “are genotypically vaccine, but phenotypically wild virus,” Orenstein explained; in other words, they look genetically like the vaccine, but behave in nature like their wild counterparts.

How a mutated virus regains power

These vaccine-derived viruses are escapees. They start in the intestines of a tiny fraction of people who receive the oral polio vaccine. The oral vaccine uses live, but attenuated, strains of poliovirus, meaning the pathogen has been altered to be harmless — or at least much less virulent. In about one in a million people, though, the attenuated poliovirus mutates in such a way that it regains its potency. Sometimes, it sickens the individual who got the vaccine, a problem known to doctors for decades. 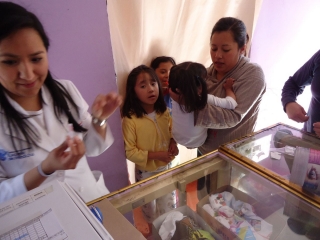 The injected polio vaccine, like the one being given to children at a clinic in Mexico, uses a dead version of the virus.
Paulette636/Wikipedia

What’s come as a surprise, however, is that even if these mutated viruses fail to affect the person in whom they originate, they may escape into the environment in the individuals’ feces and start infecting people like wild viruses do: In areas with poor sanitation systems, untreated sewage spreads the new viruses to others, who can become sickened. For instance, in Nigeria during the first nine months of 2014, 21 polio cases were caused by the circulating vaccine-derived viruses, compared to six cases from the wild virus, according to a report from the U.S. Centers for Disease Control and Prevention. In the same period, Pakistan had 22 cases from circulating vaccine-derived viruses and 170 from wild viruses, while Afghanistan had no cases from vaccine-derived viruses and nine from wild poliovirus, the CDC reported.

The risk is prompting public health experts to re-examine how best to protect children in developing countries from polio. For example, with a grant from the Bill & Melinda Gates Foundation, Maldonado is collecting data in communities in Mexico that are changing their polio-vaccination strategy.

“It’s important to understand how we can phase out the live-virus vaccine, so that we can use the killed vaccine in the best way possible,” Maldonado said, referring to a vaccination method that uses an injection of dead poliovirus. “We want not only to prevent circulation of natural polio, but also to understand how to prevent the viruses derived from the live vaccine from becoming the next source of paralysis in communities.”

Polio is a tricky foe. About 90 percent of polio-infected people don’t develop symptoms but can still spread the virus to others by coughing, sneezing or shedding it in their feces.

Among children infected with polio, less than 1 percent develop paralysis. However, those who are paralyzed may permanently lose function of one or more of their limbs, and 5-10 percent die. 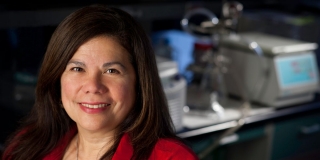 Infectious-disease expert Yvonne Maldonado and her colleagues are working to devise a strategy to keep a new version of the poliovirus from spreading.
Steve Fisch

Because the virus is so good at hiding, and because children must receive several vaccine doses to become fully immunized, the WHO’s eradication strategy has called for blanketing polio-affected regions with repeated vaccination campaigns. The oral polio vaccine has some important advantages for these campaigns, especially in developing countries. Since it’s swallowed, it gives better intestinal immunity than the injected vaccine, a boon in areas where people are often exposed to sewage. It’s cheap, and there is no worry about supplying clean needles.

But since it’s made with live strains, there is the risk of escaping virus — a risk that looks increasingly urgent in a world with fewer than 300 cases per year of paralysis from the original wild strains of the virus.

That’s why Maldonado and other researchers are taking a second look at the injected vaccine for use in low-resource areas. Developed countries, including the United States, now rely exclusively on the injected vaccine, which contains inactivated — that is, dead — poliovirus. It provides less immunity in the gut than the oral vaccine but keeps the virus out of the nervous system, where paralysis can occur.

“We don’t really understand how well the killed vaccine is going to work in kids in developing countries, where there is lots of exposure to sewage, and malnutrition leaves children with weakened immune systems,” Maldonado said.

“It’s an opportunity for us to study a natural experiment,” Maldonado said. Her team wants to know if the primary immune response to the killed vaccine will reduce shedding and transmission of later doses of live vaccine. They hope that starting with one or more doses of the injected vaccine will give kids the best of both worlds: from the shot, protection against circulating vaccine-derived viruses; from the oral vaccine, intestinal immunity.

The next challenge is addressing how long the vaccine-derived virus is going to circulate.

And, over time, as eradication of polio becomes a reality, scientists hope the oral vaccine can be phased out. “The next challenge is addressing how long the vaccine-derived virus is going to circulate,” Maldonado said. “Is the killed, injected vaccine strong enough to prevent the live vaccine virus from persisting in communities around the world?” If not, researchers may be forced to return to the drawing board to develop altogether new vaccines.

“I think we can eradicate polio with the vaccines we have,” Orenstein said. “We have proof of principle: Four of six World Health Organization regions have been certified as polio-free, and we really are down to three countries where polio persists.”

While the scientific challenges are prominent in Orenstein’s mind, he thinks the problems of getting vaccines to people in these three nations are even more pressing.

“No matter how good our vaccines are, if they remain in the vial, they’re 0 percent effective,” he said.