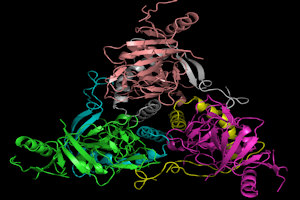 The surprising results demonstrate that whilst a high number of genetic changes have been recorded in the virus, it hasn’t changed at a functional level to become more or less virulent.

The findings, published in the journal Virology, demonstrate that the much higher death toll during the current outbreak, with the figure at nearly 10,500, isn’t due to mutations/evolution making the virus more deadly or more virulent.

Professor Simon Lovell from the Faculty of Life Sciences explains: “Using data from every outbreak since 1976 we were able to highlight what changes there had been in the RNA of the virus and then using specially developed tools predict the consequences of those changes. What we found was that whilst Ebola is mutating, it isn’t evolving to the point of adapting to become more or less virulent. The function of the virus has remained the same over the past four decades which really surprised us. Unfortunately this does mean the Ebola virus that has now emerged on several occasions since the 1970s will very probably do so again.”

Professor David Robertson says the findings can be seen as good news: “The fact that Ebola isn’t changing in a way that effects the virulence of the disease means that vaccines and treatments developed during this current outbreak have a very high chance of being effective against future outbreaks. It also means that methods to successfully tackle the virus should work again, so hopefully in the future an outbreak can be stopped from spreading at a much earlier stage.”

The team used a computational approach that PhD student, Abayomi Olabode, developed for analysing changes in HIV-1. This had highlighted adaptions within the virus in the context of protein structure. When they used it to study Ebola they expected to see similar things but didn’t.

Professor Robertson points out the advantages of the computer-based approach: “We were able to do this research quickly and whilst the Ebola outbreak was still ongoing. The data generated by Gire et al. in 2014 was all freely available and our analysis technique is a safe way to study the virus without unnecessary exposure. This type of study could be used on future outbreaks to analyse what is happening in real time within the virus. This level of surveillance will only become more essential in the fight against contagious illness as we live in an increasingly globally connected society.”

The team also stress that, counter-intuitively, analysis is needed to identify when a virus becomes less potent. This is because infected individuals could potentially infect more people if they did not progress to severe illness. The deadly nature of Ebola means the symptoms can be identified at a relatively early stage and those who had been in contact with the patient during the infectious stage readily identified by contact tracing. If it becomes less deadly then it may take longer to spot those symptoms, if they can be spotted at all, or for the person to become ill increasing the chance of spreading the virus. An attenuated virus, although less deadly on an individual basis, could spread widely and thus ultimately cause many more deaths.

Professor Tony Redmond from the University’s Humanitarian and Conflict Response Institute helped to coordinate the NHS response to Ebola in West Africa: “Like any medical response, the response to ebola must be supported by science. These are very important findings and emphasise that the spread of the virus in this outbreak owed as much to factors within the human community than within the virus itself.”

Professor Lovell concludes: “Our study demonstrates the vital role computational analysis can play during a virus outbreak. As scientists our role is to worry about the potential changes our research tool allows us to map what is happening within a virus and the consequences of any changes. Ebola will occur again, and it’s only through such close monitoring that we will contain it and ultimately eradicate it.”

The paper “Ebola virus is evolving but not changing: no evidence for functional change in EBOV from 1976 to the 2014 outbreak” will be published in the journal Virology.