Every week, people around the world play over 3 billion hours of videogames. What if, instead of shooting aliens or stealing cars, playing these games helped diagnose diseases? This opportunity is the foundation of TuberSpot, an online game that has been launched on World Tuberculosis Day.

Almost 10 million people were infected with tuberculosis in 2013, a contagious disease that affects the lungs. Despite the fact that tuberculosis is curable if diagnosed on time and treated with antibiotics, the disease kills over a million and a half people every year. Over 95% of these deaths occur in low- and middle-income countries. The countries most affected by this disease don’t have enough specialists to study all of the samples. However, thanks to new digital imaging technologies, it has become possible to virtually send blood and sputum sample images to be analyzed remotely. 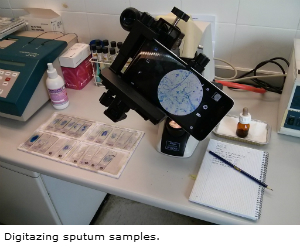 The standard way to diagnose tuberculosis is to examine samples of sputum (a liquid expelled when coughing) with a microscope and then identify and count bacilli (bacteria that causes tuberculosis). To make a diagnosis, a specialist needs to examine an average of 100 images, a process that can take up to 20 minutes. TuberSpot distributes this time-consuming task amongst many different players. In the game, real sample images are shown to the players to ‘hunt’ the bacilli before the time is up.

TuberSpot’s vision goes even further: to develop a microscopy system on a mobile phone to allow telediagnosis. This is the first time the distribution of images via the internet from remote areas is possible, and this could enable the designing of a quick low-cost telediagnosis system with large-scale expansion possibilities. In fact, the sample images from the game have been digitalized and transmitted with a phone connected to a microscope, a low-cost system designed to be used in any part of the world

In 2013, the TuberSpot research team developed the first medical ‘crowdnosis’ game called MalariaSpot. Players identify malaria parasites in images of blood samples, leading to diagnosis. Over 12,000 MalariaSpot games have been played by volunteers from 100 different countries, showing that a combination of parasites identified in the same image by 22 players can provide a result as accurate as that of a single specialist.

‘Millions of hours are invested in playing videogames every day, especially by young people, and this turns them into digital experts. A tiny percentage of that time could be enough to diagnose every case of tuberculosis in the world,’ explains Dr. Miguel Luengo-Oroz, an Ashoka Fellow and principal investigator of the project. ‘TuberSpot is a simple experiment which will allow us to continue exploring the opportunities that collaborative games and social networks can offer us to tackle global health issues’,

TuberSpot has been developed in the Biomedical Image Technologies lab from the  ETSI de Telecomunicación of the Universidad Politécnica de Madrid (International Excellence Campus Moncloa). The project has been executed in collaboration with the Innovation Unit and the Microbiology Unit of the San Carlos Clinical Hospital in Madrid, the Technology for Human Development Innovation Center in the Technical University of Madrid and the Biomedical Research Networking center in Bioengineering, Biomaterials and Nanomedicine (CIBER-BBN). The project has been partially funded by the Spanish Science and Technology Foundation (FECYT) in the development of scientific, technological and innovative culture program.