Contrary to previous assumptions, the newly detailed viral protein complex structure indicates that this type of molecular architecture differs across retroviruses. This information helps reveal how retroviruses insert their genomic information into human cells and may have implications not only for treating diseases like HIV, but also for improving gene therapy methods to deliver new DNA to patients with genetic mutations.

“The details of how retroviruses integrate differ far more than previously thought and lead to entirely distinct patterns of infection,” says Dmitry Lyumkis, a Salk Fellow and co-senior author of the new paper, published in Nature on February 18, 2016. 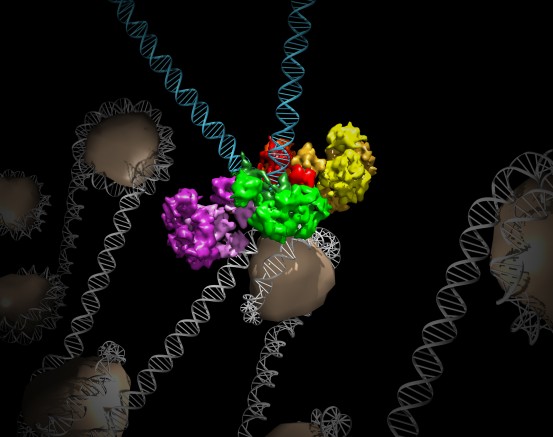 A retrovirus inserts its genetic information into the host’s own genome, essentially turning the host’s cells into virus-making factories. In the case of the well-known retrovirus HIV, those viral genes integrate into human immune cells, eventually killing them. A long-standing mystery—caused in part by the lack of knowledge about the protein complex structure—has been what dictates where viral DNA is inserted in the human genome.

A protein complex called an intasome is responsible for irreversibly inserting viral DNA into human DNA, a vital step in allowing retroviruses to cause disease. Since the intasome of HIV itself is tricky to study, most of what’s been known about intasomes is based on work from another retrovirus called prototype foamy virus, or PFV. In light of specimen-related challenges pertaining to HIV intasomes, Lyumkis and Engelman, along with their colleague Peter Cherepanov at the Francis Crick Institute, set out to determine the structure of the intasome from mouse mammary tumor virus (MMTV), which in some ways is more closely related to HIV than PFV.

To determine MMTV’s molecular structure, the team used an up-and-coming technique called cryo-electron microscopy (cryoEM), an approach that has several advantages over traditional imaging techniques. For example, researchers don’t need to coax proteins into crystal forms to image them, a hit-or-miss process that is required for the more common technique of x-ray crystallography. In cryoEM, proteins are instead directly frozen in a liquid solution. Then, by measuring how beams of electrons are deflected off of the frozen samples, scientists can determine the structure of the proteins.

This key structural difference, Lyumkis says, means that the complexes interact differently with the host DNA when they are poised to insert viral DNA into the genome. PFV prefers spots in the host genome that are highly bent, while MMTV chooses straight stretches of DNA. The preference for HIV remains a mystery, but the new observations provide an unexpected molecular framework within which to interpret past and future data on HIV and other retroviruses.

The teams of Lyumkis and Engelman are now working to understand the series of events that the MMTV intasome complex goes through during the steps of viral integration, from binding viral DNA to capturing host DNA and catalyzing the insertion of viral DNA into the host’s genome. Lyumkis also plans to apply cryoEM techniques to study the HIV intasome molecular complex itself. “The technological infrastructure is in place so now I think we can tackle these tricky and poorly behaved specimens using cryoEM,” adds Lyumkis.

Other researchers on the study were Allison Ballandras-Colas and Tamaria G. Dewdney of the Dana-Farber Cancer Institute and Harvard Medical School; Monica Brown of the Salk Institute; Nicola J. Cook and Peter Cherepanov of the Francis Crick Institute; and Borries Demeler of the University of Texas Health Sciences Center.

The work and the researchers involved were supported by grants from the National Institutes of Health, the Leona M. and Harry B. Helmsley Charitable Trust, the National Science Foundation and the San Antonio Cancer Institute.