The truth about Echinacea: Plant commonly used for colds and flu suffers from disappearing habitat 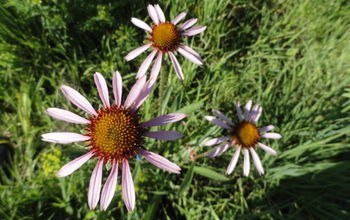 This article is the seventh in a series on NSF’s Long Term Research in Environmental Biology (LTREB) awards. Visit parts one, two, three, four, five, and six.

Widely believed to ward off and treat colds and flu, Echinacea appears in many over-the-counter remedies sold in pharmacies and in health and nutrition stores.

Echinacea is a genus of flowering plants in the daisy family. Its nine wild species live in eastern and central North America; they grow in moist to dry prairies and in open wooded areas.

With the coneflower’s popularity as an herbal supplement, more homeowners are featuring varieties of it in their gardens. Echinacea, according to the National Garden Bureau, has long been a “top five” perennial in retail sales.

“Echinacea was chosen as the 2014 plant of the year,” states a garden bureau document, “because it’s such an American staple.”

For at least one species of wild coneflower, however, the narrow-leaved purple coneflower (Echinacea angustifolia), the celebration may be short-lived.

Last riders of the purple sage?

Native to the tallgrass prairie and North American Great Plains, the narrow-leaved purple coneflower “was once abundant and had an extensive range,” says Ruth Shaw, an evolutionary biologist at the University of Minnesota.

“But with the arrival of European settlers in about 1870, many prairies were converted to agricultural fields. Along with other prairie plants, coneflowers were plowed under.”

Now the coneflower is restricted to patches of grassland, plots that are prairie remnants, Shaw and colleague Stuart Wagenius of the Chicago Botanic Garden have found.

Through a National Science Foundation (NSF) Long-Term Research in Environmental Biology (LTREB) grant, the scientists are studying the genetic composition of narrow-leaved purple coneflowers in a Douglas County, Minnesota prairie.

In the process, they’re discovering how such fragmented plant populations adapt to environmental change.

Railroad tracks and row crops encroach upon these small slices of prairie. “Native prairies are filled with plants and pollinators,” says Shaw, “but our 27 study sites have become little but coneflower islands.”

Adds Sam Scheiner, program director in NSF’s Division of Environmental Biology, which funds the research, “Many of us use an extract of Echinacea for our health. Live Echinacea plants can also help us understand the health of entire ecosystems.

“Human activities have shrunk wildlands and fragmented the landscape,” says Scheiner, “with unknown consequences for the plants and animals living there. Understanding how Echinacea is responding will help us better manage natural areas.”

To bee or not to bee in a tallgrass island

Tallgrass prairie is among the most endangered habitats in the world, says Wagenius. “We hope to quickly learn as much about it as we can. With some effort, we might be able to save at least some of these prairie patches.”

More than a century ago when tallgrass prairie blanketed the Midwest, it supported countless coneflowers–and the bees that pollinated them. A bee might have been able to fly across a hundred mile expanse of coneflowers, says Wagenius. “Could it still do that today? No way.”

Coneflower pollination is far from adequate, he says, in tallgrass prairies like those in Minnesota. Bees can carry pollen only a short distance. With fewer and fewer coneflowers in an area, bees must fly farther and farther to reach them. The pollen delivered is often less than grade-A.

From bee to gene

Where patches of tallgrass prairie are small enough, coneflowers eventually become genetically related–floral cousins and siblings. If a bee ferries pollen between related coneflowers, the pollen may be rejected by the recipient. Then no new seeds are produced; no new generation of coneflowers sprouts up.

If the pollen is accepted by a genetically related plant, inbreeding occurs. The weakling coneflowers that result often don’t survive.

“Through our studies of coneflower genetics,” Wagenius says, “we’re obtaining a new view of why populations of these plants are becoming so small.”

Lack of high-quality pollen isn’t the only danger prairie coneflowers face. Then there are the aphids.

The bane of every home gardener, aphids are no less harmful to wild plants. The breaking apart of coneflower habitats can increase Echinacea‘s susceptibility to aphids, Shaw and Wagenius discovered.

They conducted a study of the narrow-leaved purple coneflower and an aphid that specializes on feasting on it.

The results weren’t good news for coneflowers. “Aphids’ preference for inbred coneflowers may reduce the genetic ‘fitness’ of these plants,” says Shaw.

What’s a coneflower to do?

Fires started by lightning strikes induce prairie plants to flower, which can lead to more genetic diversity where the blazes have raged.

“Roads and corn fields, however, have put a stop to most of the fires,” says Wagenius, “and there’s little prairie left to burn.”

The scientists are conducting experiments on fire’s effects on tallgrass prairie, and are encouraging environmental managers to bring fire back to the prairie in controlled burns.

Otherwise narrow-leaved purple coneflowers, and the tallgrass prairies they symbolize, may soon sputter out.