KAIST medical scientists identified a cellular mechanism causing inflammatory changes in regulatory T cells that can lead to severe viral hepatitis. Research on this mechanism will help further understand the nature of various inflammatory diseases and lead to the development of relevant clinical treatments.

It is known that activated immune cells of patients with viral hepatitis destroy hepatocyte, but its regulatory mechanism has not yet been described.

Regulatory T cells inhibit activation of other immune cells and thus are important for homeostasis of the immune system. However, recent studies contradictorily show that immune inhibitory functions of regulatory T cells weaken in inflammatory conditions and the cells secrete inflammatory cytokines in response. Meanwhile, such a phenomenon was not observed in viral hepatitis including types A, B and C.

A KAIST immunology research team led by Professors Eui-Cheol Shin and Min Kyung Jung at the Graduate School of Medical Science & Engineering conducted this translational research with teams from Chungnam National University and Yonsei University to identify the mechanism in humans, instead of using animal models. The research was described in Gastroenterology last December.

Professor Shin said, “This is the first research on regulatory T cells that contributes to hepatocyte damage in viral hepatitis.” He continued, “It is significant for identifying the cells and the molecules that can be used as effective treatment targets for viral hepatitis in the future. This research was funded by the Samsung Science and Technology Foundation. 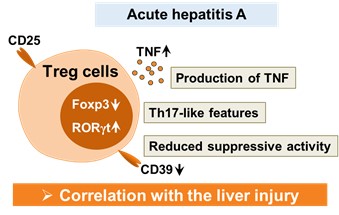 (Figure 2: A higher proportion of Treg cells from patients with acute hepatitis A, compared with healthy controls, produced TNF upon stimulation with anti-CD3 and anti-CD2. This study reports the presence and the significance of TNF-producing Treg cells for the first time in human patients.)