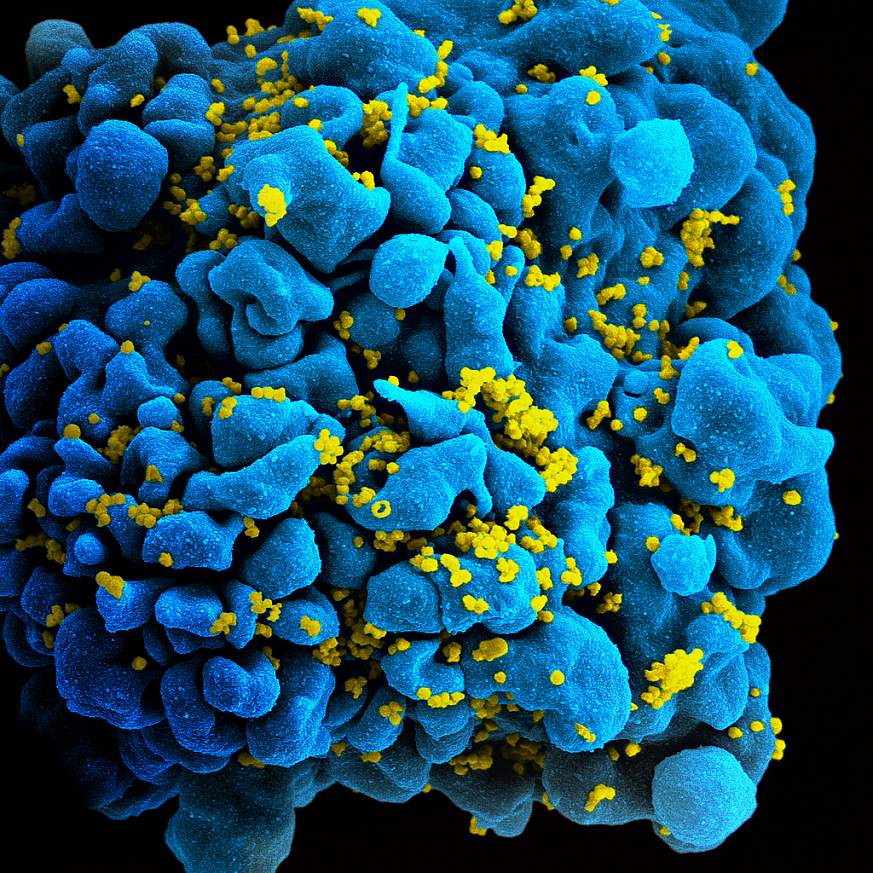 HIV appears to enlist the aid of nano-sized structures released by infected cells to infect new cells, according to a study by researchers at the National Institutes of Health. Known as extracellular vesicles (EVs), these bubble-like structures are made by many kinds of cells and, under most circumstances, are thought to ferry molecules from one cell to another, providing a means of communication. NIH scientists discovered that cells infected with HIV appear to produce EVs that manipulate prospective host cells to pass infection to other cells. The study appears in Scientific Reports.

EVs from HIV-infected cells are believed to form in much the same way as a new virus forms(link is external). Like a bulge on an inner tube, a structure forms at the surface of the cell’s outer membrane. Eventually, the part of the membrane bubble nearest the cell surface pinches off, forming a discrete sphere, separate from the cell. In the case of the virus, the sphere contains HIV’s hereditary material, RNA. EVs typically contain little, if any, HIV RNA, and so cannot infect a cell.

In the current study, the NICHD researchers isolated HIV and EVs from infected cultures, separated the two, and then tested the ability of HIV to infect new cultures — both in the presence of EVs and on its own.

Because EVs are extremely tiny and difficult to sort with conventional techniques, the researchers devised a new technology to isolate and study them. The researchers used antibodies — immune system proteins that attract and latch on to specific molecules. They then chemically attached magnetic nanoparticles to the antibodies. After the magnetic nanoparticle-carrying antibodies latched to its target molecule on the surface of an EV or virus, the researchers used magnetic forces to pull the viruses or EVs out of solution.

When released by cells, both EVs and HIV take with them many proteins found in the cell membrane, Dr. Margolis explained. However, EVs carry the CD45 protein and the enzyme acetylcholinesterase, while HIV does not. Using antibodies directed at these proteins, the researchers were able to pull EVs out of laboratory preparations of HIV. They found that EVs produced by HIV-infected cells also carry an HIV protein on their surfaces, gp120, which HIV uses to bind to cells in the infection process.

When the researchers added the EV-depleted sample to blocks of human lymphatic tissue, HIV infections in the cultures were 55 percent lower, compared to a control sample that retained EVs. The researchers believe that the loss of the gp120 that would have been provided by the EVs (had they not been removed from the HIV cultures) was responsible for the drop in HIV infection. While EVs lack the HIV RNA to infect a cell, the researchers theorize that the gp120 on the EV surface can interact with the host cell, allowing HIV to infect it more easily.

Other authors of the study were Anush Arakelyan, Ph.D, Wendy Fitzgerald, Ph.D., Sonia Zicari, Ph.D. and Christophe Vanpouille, Ph.D, all of the NICHD Section on Intercellular Interactions.

About the Eunice Kennedy Shriver National Institute of Child Health and Human Development (NICHD): NICHD conducts and supports research in the United States and throughout the world on fetal, infant and child development; maternal, child and family health; reproductive biology and population issues; and medical rehabilitation. For more information, visit NICHD’s website.