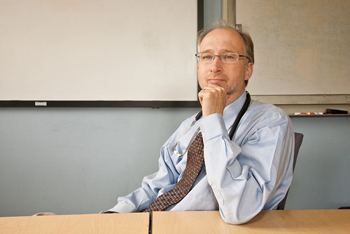 “This team has consistently demonstrated elegant and creative work focused on the mechanisms and consequences of immune dysfunction in HIV-infected patients,” said Janet Myers, PhD, MPH, vice chair of the Academic Senate’s Committee on Research.

Paul Volberding, MD, director of the Center for AIDS Research at UCSF, introduced Deeks and McCune. Together, he said, the two have done remarkable things, including exploring the role of the thymus, effects of treatment discontinuation, viral fitness, the overall concept of HIV and aging, and the role of immune activation and microbial translocation.

Of the three large grants in the United States that are centered on finding a cure for HIV, one is being led by Deeks and McCune, Volberding said.

In short, Deeks and McCune are among UCSF’s legendary leaders working on the frontlines of the field since its emergence more than three decades ago. 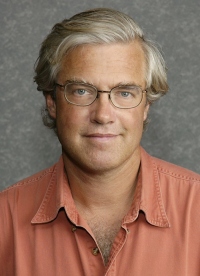 Their lectures, 45 minutes apiece, made it clear how their work has shifted the focus from HIV itself to how the immune system responds to the virus.

“Each of us has walked through this epidemic. We’ve seen the high points and the low points,” said McCune, chief of UCSF’s Division of Experimental Medicine, who stressed that getting rid of HIV will happen only with a group of people working together in a collegial and collaborative way.

A Model of Care at San Francisco General Hospital

That conviction is rooted in the work he and Deeks have done at San Francisco General Hospital and Trauma Center (SFGH), where both are based. McCune began his UCSF residency there in 1982.

“When I arrived, I saw the quality of care provided at San Francisco General, and I was totally amazed,” McCune said. “… shortly thereafter, the AIDS epidemic hit the fan there.”

It was a dramatic time, he said, with 10,000 deaths in the first 10 years at SFGH alone, where inpatient and outpatient care set up a model for the nation. “The way people worked together to take care of these patients was totally foreign to me, the solitary lab rat,” he added, describing a multidisciplinary collaborative environment where you’d talk not just to colleagues but also to patients. “It was magic.”

Along the way to where he is now, McCune helped create a mouse with a functioning human immune system and helped found two biotech companies. He also learned that “HIV disease is where money is not.”

Currently, McCune and his colleagues are working on three projects with a central hypothesis: HIV disease progression and persistence, after the initiation of therapy, are driven in part by chronic inflammation.

The first project is focused on the developmental biology of the human fetal immune system, and is tied to the fact that only 5 percent to 10 percent of babies born to HIV-positive untreated mothers are infected at birth. The second is exploring tolerance to HIV after exposure in nonhuman primate fetuses. The third is looking at various pathways of inflammation.

Deeks, like McCune, did his UCSF residency at SFGH. He arrived in 1990, which he called a critical point in the AIDS epidemic.

In the mid-’90s, he met Brenda Lein and Martin Delaney of Project Inform. “I got engaged in community activism and I learned … how if you’re going to do HIV research, you don’t do anything unless the patient population wants you to do it,” Deeks said.

During his work with Jeff Getty, an AIDS patient on whom Deeks performed a bone marrow transplant from a baboon in 1995, he made another key realization that shaped what he and McCune are doing today: “Inflammation is a very bad thing for people with HIV disease.” More recently, he has worked closely with Timothy Brown, also known as the “Berlin Patient,” who was cured of HIV five years ago.

Just as McCune had done, Deeks spoke of many colleagues, showed their pictures and emphasized the value of “Team Science” at all levels. Collectively, he said, a large team has produced a conceptual model saying that HIV produces chronic inflammation through multiple mechanisms, and that this inflammation causes vascular disease and excess risk of non-AIDS morbidity. The team is now leading clinical trials of various interventions.

“At the end of the day, you’ve got to build an infrastructure to support this work,” said Deeks, who gave as an example the SCOPE Cohort, a unique platform for collecting biologic specimens of high interest to investigators and for supporting clinical trials. So far, 500 investigators have accessed about 40,000 specimens, resulting in 150 publications.

Deeks concluded by saying, “We in academics can make a lot of noise, we can write lots of papers, we can have a lot of fun … but I really don’t think we’re going to go very far until we’ve got the full engagement of industry.”

However, industry for the most part is not fully engaged yet in the concept of a cure. What it will take, Deeks said, is breaking down cultural and legal barriers so that academics can work with companies – and companies work with each other – in a team approach to conquering HIV.