Adults who are HIV-positive can experience both high- and low-range hearing loss. Credit: Peter Torre
By Michael Price 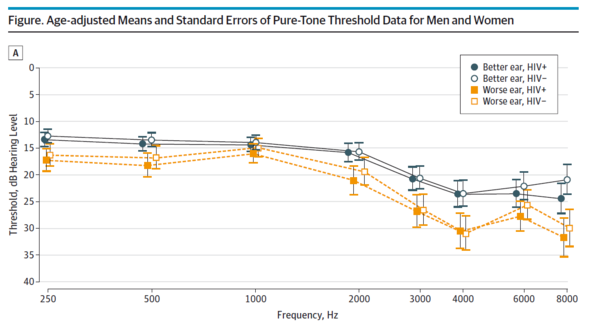 Compared to adults without HIV, HIV-positive adults are at higher risk for hearing loss indepedent of their severity of infection or adherence to medications, according to a new study published today in the the journal JAMA Otolaryngology—Head & Neck Surgery. It is the first comprehensive study to examine hearing loss after accounting for the effect of HIV medication use, adherence and HIV related-disease factors.

Researchers have known since the early 1980s that there appears to be an association between HIV and hearing loss, but it has proven difficult to explain exactly how and why it occurs.

The researchers recruited middle-aged HIV-infected participants from two long-standing HIV cohort studies: men from the Multicenter AIDS Cohort Study, which began in 1984, and women from the Women’s Interagency HIV Study, which began in 1994. The recent study was overseen by Michael Plankey, an infectious disease epidemiologist and investigator for both cohort studies.

Torre, the study’s lead author, designed an experimental procedure to screen these participants for various symptoms of hearing loss. After being screened out for various prior symptoms of hearing loss, each participant had a standard clinical hearing test at a university-based audiology clinic to determine whether they could hear a variety of tones ranging from 250 to 8000 hertz at different volume thresholds. The researchers also collected data on how long the HIV-positive participants’ had been taking HIV medication and how adherent they were to the treatment regimens. They also measured participants’ white blood cell count and the amount of HIV virus in the blood to determine disease progression.

Existing literature predicted that researchers would find results similar to premature aging in the HIV-positive participants. That is, they expected those participants’ low-frequency hearing to be relatively intact with a drop-off toward higher frequencies.

“What we found was a little different from what we expected,” Torre said.

They found that the HIV-positive men and women had trouble hearing both the low tones and the high tones. On average, their threshold for hearing the tones was about 10 decibels higher than HIV-negative men and women.

The participants’ white blood cell count, amount of HIV virus in the blood, duraation of time taking HIV medications and adherence did not explain the hearing loss found among the HIV-positive men and women.

The researchers aren’t able to explain the physiological mechanism behind hearing loss in HIV-positive people, but the fact that it occurs regardless of the use of HIV medication or other disease variables suggests that it could be a response to inflammation or some other process caused by the HIV virus itself, Torre explained. Study co-author Howard Hoffman, director of epidemiology/statistics at NIDCD, noted that the pattern of hearing loss across both low and high frequencies for these middle-aged HIV positive subjects is reminiscent of that found for adults with diabetes.

This group of investigators will be conducting additional studies to uncover the reasons for this hearing loss.

“Our hope is that by understanding exactly how HIV relates to hearing loss, we can find or develop some medication that is therapeutic or protective against loss of hearing,” Torre said.