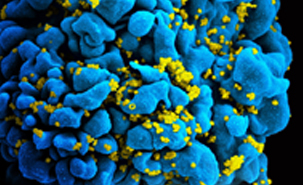 This breakthrough, published today in the Proceedings of the National Academy of Sciences, opens a new path in the fight against HIV and could ultimately lead to the design of a vaccine to prevent transmission of the virus. This innovative approach could also be part of the solution for one day eradicating the virus. Despite recent advances, 35 million people are infected with HIV-1 worldwide.

“We found that people infected with the HIV-1 virus have naturally occurring antibodies that have the potential to kill the infected cells. We just have to give them a little push by adding a tiny molecule that acts as a can opener to force the viral envelope to expose regions recognized by the antibodies, which forms a bridge with some cells of the immune system, initiating the attack,” says study lead author Andrés Finzi, researcher at the CRCHUM and a professor at the University of Montreal.

In an earlier study, also published in 2015 (Veillette et al., 2015), the same team of researchers showed that the serum of patients infected with HIV-1 facilitated the elimination of infected cells when two proteins specific to the virus, Nef and Vpu, were deactivated by gene mutation. The experiments were conducted with serum samples from the AIDS and Infectious Diseases Network (SIDA-MI) cohort of the Fonds de recherche en santé du Québec (FRSQ).

In real life, however, wild-type HIV-1 virus, responsible for the vast majority of infections in the world, still contains these proteins, which act like bodyguards. So how can we outwit them? By adding a tiny molecule to the cell surfaces of infected patients – called JP-III-48 – which imitates a protein called CD4. CD4 proteins are located at the surface of T lymphocytes and allow immune system cells to be infected by HIV.

“The virus has to get rid of the CD4 proteins to protect itself. Adding the small molecule forces the viral envelop to open, like a flower. The antibodies that are naturally present after the infection can then target the infected cells so they are killed by the immune system,” explains Jonathan Richard, postdoctoral researcher at the CRCHUM and lead author of the study. The JP-III-48 molecule was developed by researchers at Harvard University and the University of Pennsylvania; however, this is the first time it has been successfully tested on patients infected with HIV.

For decades, scientists have been trying to devise a vaccine to block HIV infection, which causes AIDS. Antiretroviral drugs can slow the spread of the virus, but it remains hidden dormant in cells and returns when the treatments cease. This is called HIV “reservoirs.” “The solution is to develop a ‘shock and kill’ therapy. We have to reactivate HIV reservoirs to force the virus out of its hiding place, then kill the infected cells with this molecule and the already present antibodies,” argues Finzi, who is also the Canada Research Chair on Retroviral Entry.

The discovery by Finzi’s team could help develop a two-part vaccine to prevent HIV infection: through antibodies that are easy to generate and using this new family of molecules. Furthermore, this discovery opens the way for the development of strategies to eliminate the viral reservoirs of individuals already infected. The next step is to test the potential of this can-opener molecule in monkeys.

The study was financially supported primarily by the Canadian Institutes of Health Research, the Canada Foundation for Innovation, and the Fonds de recherche du Québec – Santé. Andrés Finzi holds the Canada Research Chair on Retroviral Entry and is professor at the University of Montreal’s Department of Microbiology, Infectious Diseases and Immunology. Jonathan Richard is the recipient of a research fellowship from the Canadian Institutes of Health Research. The authors also thank the Center for HIV/AIDS Vaccine Immunology Discovery (CHAVI-ID), funded by the United States’ National Institutes of Health. For more information, see the article published online in the Proceedings of the National Academy of Science. The University of Montreal is officially known as Université de Montréal.