No effective vaccine exists to date against the tropical disease malaria. Scientists from the German Cancer Research Center (DKFZ) have now studied how the human immune system responds to natural infection by the malaria parasite. Analyzing individual immune cells, they discovered that the immune system produces antibodies that are protective against the disease in mice. In addition, long-lived memory cells are formed and produce this antibody again if needed. These findings will help develop more specific next-generation vaccines. 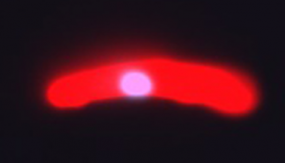 During the mosquito bite, the sporozoite stage of the unicellular malaria pathogens is transmitted to humans. Antibodies that are induced by a natural infection label the major sporozoite protein, the CSP (red). © Wardemann/DKFZ

More than three billion people worldwide are at risk of contracting malaria. They live in regions where mosquitoes transfer the single-celled infectious agents, Plasmodium parasites, which cause the tropical disease. For decades, scientists have put intensive efforts into developing a vaccine against malaria. A vaccine that was approved in 2015 proved to be poorly effective. The weak immunization it generated also did not last long.

“Ideally, a vaccine should elicit an antibody response against the so-called sporozoites, the parasite stage that the mosquito transfers to humans,” says Hedda Wardemann from the German Cancer Research Center (Deutsches Krebsforschungszentrum, DKFZ) in Heidelberg. “If the immune system is able to destroy the infectious agent at this stage, before it reaches the liver, then the infection is stifled from the start.”

In order to facilitate the development of more specific future vaccines, Wardemann and colleagues have now investigated how the immune system responds to natural malaria infection. The investigators examined, for the first time, at single-cell level whether a lasting immune memory is formed. “With our study, we want to generate knowledge that can flow into developing the next generation of malaria vaccines,” the DKFZ immunologist said.

In their study, the researchers used blood samples from people living in a malaria high-risk area. From the samples they isolated long-lived memory B cells of the immune system that were directed against malaria sporozoites. Memory B cells carry antibodies on their surfaces without releasing them into the blood. But if they get into contact with the infectious agent again, large quantities of their antibody are produced, ideally preventing an infection.

The investigators found these memory cells in almost all study subjects, albeit in very small quantities. Yet the relevant finding was that a number of the memory cells produce antibodies that protect mice from infection by sporozoites. This enabled the researchers to analyze the exact amino acid sequences of the sporozoite protein that are targeted by these protective antibodies.

It came as no surprise to Wardemann’s team that following natural infection only very few memory cells are formed. Only small quantities of sporozoites get into the blood per bite and, in addition, they rapidly disappear in the liver. “The quantity is simply too small to stimulate the immune system sufficiently,” said Wardemann.

Nevertheless, she thinks that it is possible to develop a protective vaccine against sporozoites. “An effective vaccine must cause the memory cells to generate an extremely powerful response – before the sporozoites disappear out of reach into the liver. To make this happen, we must know the targets of a protective immune response as exactly as possible. In our current study, we have achieved this: The sporozoite amino acid sequences against which the protective antibodies are directed can serve as a basis for a new vaccine.”

Plasmodium parasites have an extremely complex life cycle. During a bite by specific mosquitoes, the infectious agents are introduced into the host in a form called sporozoites. Within a few hours, sporozoites infect liver cells, where they mature and multiply. They leave the liver as “merozoites” and invade red blood cells. There, they multiply again, releasing new merozoites that, in turn, infect erythrocytes. This cyclic infection and breakdown of red blood cells causes the typical recurrent malaria symptoms.