ANN ARBOR, Mich. — For most invading bacteria, the bladder is not a friendly place. A close-up view of the E. coli bacteria similar to those that cause the vast majority of urinary tract infections. Credit: NIAID

But for those that have figured out how to scavenge iron from their hosts, it’s a fine place to grow and reproduce. And for millions of women a year, that means painful, burning, potentially dangerous urinary tract infections.

Now, in an ironic twist, scientists have turned that iron-scavenging power against the most common UTI-causing bacteria.

For the first time, they’ve prevented UTIs in mice by vaccinating them with the same molecules that the bacteria usually use to grab iron and fuel their growth. The results are published in the Proceedings of the National Academy of Sciences (link is external) by a team from the University of Michigan Medical School.

They caution that a human UTI vaccine based on the approach is still years away. But the success of vaccination with the small iron-grabbing molecules, called siderophores, paves the way for further research.

The same team previously reported success in preventing UTIs using a vaccine made of proteins from the bacteria, called uropathogenic Escherichia coli or UPEC. Neither the protein approach nor the siderophore approach provided complete protection, but the two approaches together might.

UPEC causes more than three-quarters of UTIs in otherwise healthy women, and the bacteria produce “stealth” siderophores that evade the host immune system and are unique to them. That makes these molecules good candidates for a vaccine without unintended consequences.

In fact, in the same issue of PNAS, a team from the Massachusetts Institute of Technology and University of California, Irvine report success in preventing gut infections by vaccinating mice against Salmonella using siderophores made by those bacteria. 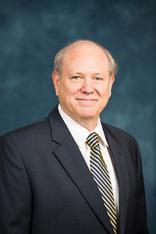 With E. coli gaining resistance to the antibiotics that many women take to treat UTIs, or prevent recurring ones, the search for a vaccine takes on new urgency, says Harry Mobley, Ph.D., (link is external) senior author of the new paper and chair of the Department of Microbiology and Immunology at U-M.

Recent findings that cranberry juice does not prevent UTIs adds to that urgency.

UTI care in the United States costs more than $3.5 billion a year, and affect half of all women sometime in their lives. Half of those who get one will get another in the next year, and about 4 million women suffer continuous UTIs. Women suffering recurrent UTIs are the most likely candidates for a vaccine, says first author and research fellow Laura Mike, Ph.D.

Mike, Mobley and their colleagues assessed the effect of siderophore vaccination in several ways. They started by applying two different UPEC stealth siderophores inside the noses of mice, several times over the course of two weeks.

A week later, they applied UPEC bacteria directly into the mouse bladders, waited two days, and then looked at their urine, bladder and kidneys, which get involved when a UTI rages out of control.

When each of the two siderophores was administered individually, modest protection against UTI resulted. But treating the mice with both siderophores and the carrier protein at the same time produced a much greater effect.

“We saw efficacy more in the kidney than in the bladder, suggesting that this approach may be most useful in preventing advanced UTIs,” says Mike. “Our next challenge is creating a combination vaccine that also employs proteins that UPEC bacteria use to bind their iron-laden siderophores, and test other adjuvants to increase the response.” 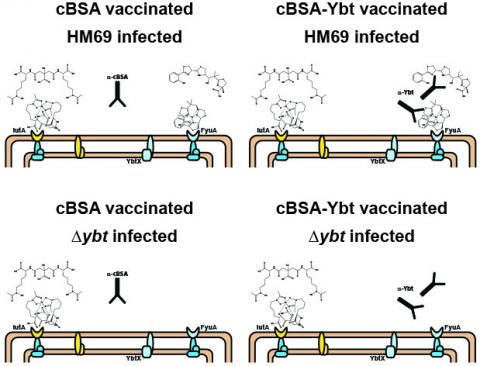 The vaccine works best when a “stealth” siderophore made by UTI-causing E. coli bacteria (in this case, one called Ybt) is attached to a carrier protein called cBSA. The top right image in this diagram shows how that might work, leading the immune system to recognize bacteria that make that siderophore. The other three images show why vaccination with the carrier protein alone doesn’t work (top left) and why the vaccine is only effective when siderophore in the vaccine matches those made by the E. coli (bottom).

The team is planning to expand their study to see if they can protect against the bloodstream infection, or bacteremia, that can cause some UTI sufferers to develop sepsis and die.

Mobley notes that the researchers did not find direct evidence of antibodies made by the mice responding to the siderophore vaccine. But the findings, including detailed examination of the bladder and kidney tissue, are consistent with an adaptive immune response stemming from the vaccination, he says.

Other teams have tried to use siderophores against UTIs, but did not go as far as the U-M team. Using a small molecule such as a siderophore against bacterial infections is itself a novel approach, Mobley notes.

And, says Mike, since other dangerous bacteria make their own unique siderophores, the approach could be attempted beyond UPEC and Salmonella. Recently, U-M researchers showed the role of siderophores in the ability of a “superbug” bacteria called Klebsiella pneumonia to cause pneumonia and much worse.

“Using proteins that are found on the surface of bacterial cells as the basis for vaccination may lack efficacy because of the variability of the exact protein structure,” says Mobley. “But siderophores are the same across most gram negative enteric bacteria that cause some of the worst infections. This is a step along the journey, but it’s an encouraging one.”

In addition to Mobley and Mike, the study’s authors are Sara N. Smith, Christopher A. Sumner and Kathryn A. Eaton, Ph.D., DVM. The researchers used the U-M Medical School’s Proteomics and Peptide Synthesis Core, and the resources of the Host Microbiome Initiative launched by the school several years ago to support work on microbes that reside in and invade the human body.

The research was funded by the National Institutes of Health (AI116791, DK097362, AI007528) and by Mike’s support from a Research Scholars Fellowship from the American Urological Association administered by the Urology Care Foundation. Mobley is the Frederick G. Novy Distinguished University Professor of Microbiology and Immunology.