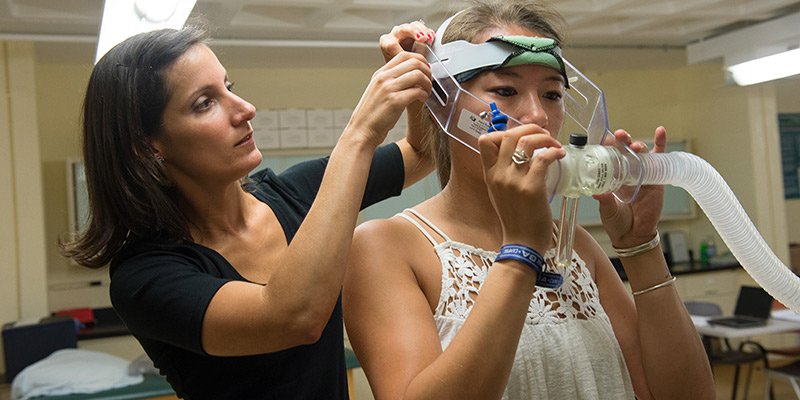 “He didn’t have a significant amount of weight to lose,” says Loftus. “It was more about being self-aware of what he was eating and his portion sizes, which were pretty large.”

The weight management program run by Connie Tompkins, assistant professor of exercise physiology, has produced similar results for other adolescents who have completed the program over the past three years. On average, they lost about four percent body fat and gained about four pounds of muscle — a significant exchange of body mass that transforms the way participants look and feel.

“Their weight doesn’t always change, and in fact sometimes it will stay the same, but when we show them that they lost fat and gained lean body mass they start to buy in,” says Tompkins, an expert in the prevention and treatment of childhood and adolescent obesity. “So even though their weight stays the same, they look and feel better, their clothes fit better and their confidence goes through the roof.”

In one case, a teenager who was seeing an endocrinologist lost 8.5 pounds of fat and gained 8.5 pounds of muscle despite his weight essentially staying the same. “When he went back to the endocrinologist, he was told he didn’t have to come back anymore because he was no longer pre-diabetic,” says Tompkins, who submitted her findings to the American College of Sports Medicine and has a forthcoming paper on the topic.

Loftus’ son experienced more typical, but above average results by dropping 6.5 pounds of body fat and gaining 6.5 pounds of muscle. “He definitely felt better after the program,” says Loftus. “It helped to see the numbers each week because it was evidence that it was working. He still watches his portion sizes and no longer drinks soda. Connie and her students were great to work with and really stressed the importance of making small changes and being consistent over time.”

Tompkins, who has conducted similar school-based, physical activity interventions in elementary and middle schools, intentionally keeps the program simple and relies on established weight loss practices, such as caloric intake as part of a healthy overall nutritional plan and exercise regime. She also relies on current research in the field including her own to inform her practice and improve the program. Her most recent article in the Journal of Physical Activity and Health, “Heart Rate and Perceived Exertion in Healthy Weight and Obese Children During a Self-Selected, Physical Activity Program,” revealed that healthy weight and obese children showed no differences in how hard they felt like they were working — or in their actual heart rate — while engaging in fun or non-structured exercises.

“We hypothesized that this was likely due to the design of the program, which lets kids engage in free play rather than making it a structured program, so that’s something that I’m incorporating into the weight management program,” says Tompkins. In another article, Tompkins wrote about how substituting dietary monounsaturated fat for saturated fat is associated with increased daily physical activity and resting energy expenditure and with changes in mood.

“The goal is to continue to use the data from the program to modify it and help as many kids as possible. If it can help even just one child then it’s worth it to me,” she says.

When participants start the program they have an average body fat of 44.7 percent ranging from 36.3 to 54.7 percent, with about 35 percent meeting the criteria for having a food addiction. They attend an initial intake meeting that involves a questionnaire, physical fitness test, a DEXA test to measure body composition, and an analysis of nutritional habits. Based on these results, a 12-week plan is developed with participants required to keep daily food records and exercise logs that are shared at weekly meetings with Tompkins, exercise science students and graduate students in the Master of Science in Dietetcis (MSD) program, and dietician Amy Nickerson (senior lecturer and director of the MSD program) at UVM’s Physical Activity and Wellness Laboratory.

“Most of the time when they come in it’s either that the nutrition piece is hard for them or they don’t like to exercise,” says Tompkins, who is applying for grants from the NIH and other organizations to expand the program. “We don’t put them on a diet because as our dietician (Nickerson) says, a diet indicates that you will go off it one day when what we want is to instill a balanced approach to nutrition. If they stick with it — and we lose a few from each group — they have significant changes in all of the positive healthy behaviors. In adolescents, if they don’t gain weight we consider it a success, but that’s hard for them because if they don’t see weight loss they want to quit. Eventually, their clothes start fitting better and they feel better about the program and themselves.”

When participants finish (63 percent have made it through so far) they show significant improvement in a wide range of key areas. Preliminary data has shown decreases in BMI, blood pressure, and resting heart rate; significant increases in overall body weight due to increases in lean muscle mass and a decrease in fat; increases in physical health-related quality of life (HRQOL); increases in VO2max (cardiorespiratory fitness); decreases in citrus fruit/citrus juice consumption; increases in the use of the nutrition food labels leading to better eating habits; and an increase in various levels of physical activity.

There’s an app for that

One of the most challenging problems of the program, which has filled a void following the closing of a similar program at Fletcher Allen Health Care, is keeping participants on track between weekly meetings. Tompkins sends friendly reminder texts, but that has been only moderately effective. That changed after she received a call from one of her former students, Eben Pratt ’14, who recently launched Stern/Force Technologies along with fellow alums Joshua Barry ‘14, who studied computer engineering at UVM, Jenna Bushor ’14 and current senior Tyler Sawyer.

“I called Connie to see if she would be interested in an app we were developing for mobile devices that would allow her to send messages to subjects in a more streamlined way and that would give her the ability to download information to a spread sheet,” says Pratt, who came up with idea after breaking his leg in college and failing to do his rehab between visits to the physical therapists office. “I needed someone to remind me to do my rehab exercises, so the idea of creating a simple way for people in sub-medical field like physical therapy, athletic training, strength and conditioning, and chiropractic was exciting.”

Sawyer is writing code, and Bushor is developing the Web portal for the app, which participants can download from iTunes on their own mobile devices or on the iPod Touch given to them as part of the program. Tompkins will have the capability to send tasks or to-do prompts to participants who can check “yes” or “no” depending on if they competed it. “So basically I can write whatever I want on my computer, and they will receive a pop-up on their device and they can respond back. I’m hoping it allows me to work with more people and participants who might live farther away and can’t come here on a weekly basis.”