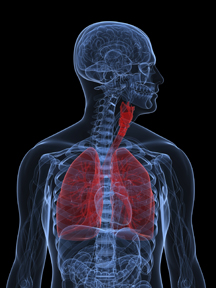 The Lung Health Center at the University of Alabama at Birmingham is one of the 10 sites participating in the COPD Clinical Research Network.

The findings indicate that the antibiotic azithromycin is effective in reducing COPD exacerbations, which are typically caused by bacteria, viruses or a combination of both. Azithromycin is already prescribed for a variety of bacterial infections, including pneumonia and strep throat.

“Exacerbations account for a significant part of the COPD health burden,” said Mark T. Dransfield, M.D., director of the UAB Lung Health Center and associate professor in the Division of Pulmonary, Allergy and Critical Care Medicine. “These promising results with azithromycin may help us reduce that burden and improve the lives of patients at risk of these acute attacks.”

Previous studies of cystic fibrosis and other pulmonary diseases suggested that azithromycin might be effective in reducing COPD exacerbations. The study, begun in 2005, enrolled more than 1,000 subjects, 140 of them at UAB and the Birmingham Veterans Affairs Medical Center.

Eighty percent of the study participants already were taking other medications normally used to manage COPD, such as inhaled steroids and long-acting bronchodilators.

Side-effects of this commonly prescribed antibiotic were minimal. Azithromycin increased the presence of antibiotic-resistant microbes in some patients, although no one developed an infection. It also caused slight hearing loss in a small fraction of participants.

Dransfield says azithromycin may be indicated for up to a quarter of the 12 million people in the United States with COPD, particularly those with  moderate to severe disease who require oxygen or who have a history of exacerbations within the past year.

COPD is a progressive disease of the lungs and is now the third leading cause of death in this country, having recently surpassed stroke. There is no cure, though a combination of drugs and lifestyle changes can help manage the symptoms, reduce exacerbations and improve quality of life.

The study was funded by the National Heart, Lung, and Blood Institute, part of the National Institutes of Health.  The COPD Clinical Research Network is an NHLBI-funded consortium of research centers located throughout the United States that was established to identify new treatments for COPD.