For the first time, researchers have found the presence of predator bacteria in the microbiota of cystic fibrosis patients. There are researchers from UPM among the authors of this finding.

The results, obtained by a team of researchers from Hospital Universitario Ramón y Cajal, Instituto Ramón y Cajal de Investigación Sanitaria  (IRYCIS) and School of Agricultural, Food and Biosystems Engineering (ETSIAAB) at Universidad Politécnica de Madrid (UPM), have allowed them to design a computational model to eradicate the pathogens of cystic fibrosis lung by inoculating predator bacteria. The results have been published in mBio®, an open-access journal of the American Society for Microbiology.

The new technique of next-generation sequencing (NGS) gives evidence of the complexity in the lung microbiota, and also allows identifying a large number of bacteria unknown in cystic fibrosis lung patients so far. 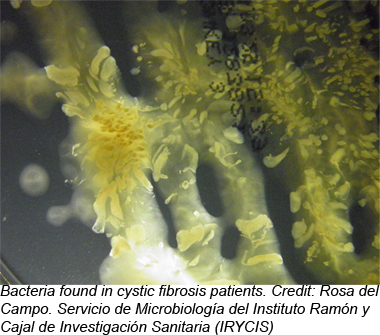 UPM researchers from the group of Complex System were involved in this study that has used NGS tools to monitor the fluctuations of this ecosystem in 15 cystic fibrosis patients during a 1-year follow-up period, describing for the first time the presence of two predatory bacteria in the cystic fibrosis lung microbiome: Bdellovibrioand Vampirovibrio.

These to depredatory bacteria have led to develop a computational model based on agents where the behavior of the prey and predator are reproduced. The model initially presents 500 agents with five different species: two species with predator roles and three species with prey roles. By varying the initial amount of predators we achieve the classic solutions of the Lotka-Volterra type models: either total extinction of all species or coexistence of a predatory species and other prey species.

According to Javier Galeano, a researcher involved in this study, says: “The newly designed computational model allows us to hypothesize that inoculation of predators into the pulmonary microbiome might contribute to the control of chronic colonization by cystic fibrosis pathogens in early colonization stages”.