The cause of idiopathic pulmonary fibrosis (IPF) is unknown, but a discovery from the lab of Anjelica Gonzalez about an overlooked cell – and its ability to go from good to bad – provides important clues. 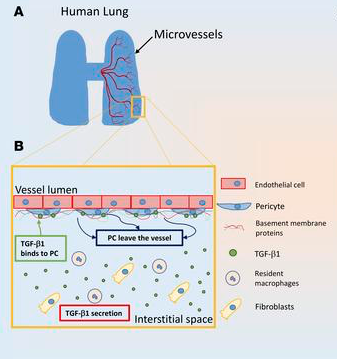 In collaboration with the lab of Erica Herzog at the School of Medicine, Gonzalez and her research team have for the first time identified the role that pericytes’ play in IPF, a chronic and often fatal lung disease. The results of their work are published in the Journal of Clinical Investigation Insight.

While most researchers in the field of tissue engineering tend to study the cells of arteries and other larger blood vessels, Gonzalez focuses on the smallest blood vessels because of their importance to such organs as the lungs, brain and heart. Pericytes are the cells that surround the outside of these blood vessels.

“We’re looking at these vessels because when IPF gets pretty bad, those small vessels go away and the tissue dies because there is limited nutrient and oxygen delivery to it,” said Gonzalez, the Donna L. Dubinsky Associate Professor of Biomedical Engineering. What exactly happens to those cells, though, has long been a question. A commonly held theory was that they had simply died.

The researchers took samples of human lungs from IPF patients and studied the lesions at the origins of the fibrosis, which involves the scarring and stiffening of the tissue. They found that pericytes made up 15% to 21% of the lesions.

“These findings were the first identification anyone’s made that pericytes make up a portion of these lesions,” Gonzalez said. “No one before had confirmed that these cells could be contributing to the disease. Now we see that these blood vessel cells are still alive – they just become dysfunctional, as opposed to being supportive of healthy tissue.”

The discovery allowed the researchers to engineer human lung in the lab, and to transform pliable healthy lung tissue into stiff fibrotic tissue. Essentially, they developed an engineered human lung that could mimic the progression from health to fibrotic disease.

“In this way, we were able to explore how and why the pericytes are responding to signals that drive fibrosis,” Gonzalez said. They found that the cells remained healthy as long as the tissue was soft and pliable. However, once becoming exposed to circulating factors, the cells were able to remodel their environment and deposit proteins that created stiff scar-like tissue.  Sensing the mechanical changes in the environment, a process known as mechanosensing, proved to be a primary factor causing the transformation of healthy vascular cells to fibrotic cells.

The next step in this work is to inhibit or reverse the processes, and convert fibrotic tissue to healthy tissue. To do that, Gonzalez will test various drugs that were recently approved or currently in the process of approval to see the extent to which they help return human cells and tissues to a healthier state.

“We hit the cells with this drug, and they started producing enzymes that degrade the environment and make it soft again,” she said. In doing so, the cells send signals to themselves – a process called auto-regulation – and the fibrotic cells go back to being healthy.

Down the road, the discovery could potentially lead to new therapies that not only change the cells back to healthy ones, but also allow them to contribute to the formation of new vessels.

Fibrosis can affect many of the body’s organs, so Gonzalez said she would like to see this platform also be used to study the effects of fibrosis on the skin, heart and other tissues.