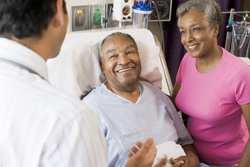 More Americans are suffering from acute respiratory failure, a dangerously low level of oxygen in the blood, but according to a study by the University of Michigan, black Americans were at the greatest risk for developing the condition.

Although fewer deaths are reported, respiratory failure in the United State tripled over a 16-year-period to about 323,474 diagnoses a year.

After analyzing national discharge data from 1992 to 2007, researchers found that black Americans had nearly twice the incidence and other-race patients had 1.6 times the incidence of acute respiratory failure compared to white Americans.

Colin R. Cooke, a recent graduate of the Robert Wood Johnson Clinical Scholar at the University of Michigan and lead author of the study published online ahead of print in Critical Care Medicine, said several factors might contribute to this racial disparity.

Blacks are more likely to develop some other conditions that can lead to respiratory failure, including sepsis — a sometimes fatal bloodstream infection.

“There are a number of reasons black Americans might have predisposing conditions, like sepsis, at a higher rate than white Americans,” he says. “Although some speculate that greater genetic susceptibility for infection may be responsible, factors such as differing chronic disease rates and social and environmental differences across race groups likely account for racial disparities of these conditions.”

Cooke says although it’s well-established that the incidence of sepsis is higher for black Americans, this study is one of the first to look at the racial underpinnings of acute respiratory failure.

Respiratory failure is considered a medical emergency and can be caused by pneumonia or other lung diseases such as cystic fibrosis, trauma, obesity and even poisoning.

He says more research is needed to further establish other factors that contribute to race-based differences in respiratory failure rates.

At the same time, Cooke noted that future work examining the causes of increasing respiratory failure would have greater impact on the health of Americans.

“Although it is essential to determine the causes for differences in rates of respiratory failure across race groups, it is important to note that respiratory failure for all race groups increased dramatically over the study period,” he says. “Identifying and addressing the responsible factors for this dramatic change will benefit everyone.”