ANN ARBOR, Mich.-There isn’t a hard and fast rule for how long doctors should perform CPR, but new research from the University of Michigan Health System shows longer attempts might be beneficial for some patients. 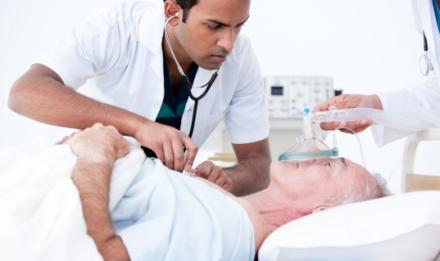 Most cardiac arrest patients are often successfully resuscitated after a short period of time – about 12 minutes on average. Practitioners are often reluctant to perform longer attempts – those that can last 30 minutes or longer – because if patients do not survive early on during cardiac arrest, their overall prognosis is poor.

The research from U-M, however, shows that for some patients, successful resuscitation only occurred after 30 minutes or more.

On a broader level, the researchers found that patients at hospitals where attempts were longer, on average, had a higher likelihood of immediate survival and survival to discharge, even after accounting for differences in overall patient characteristics.

Importantly, patients who survived with longer arrest times did not appear to have substantially worse neurological function at discharge.

The study, led by cardiologist Zachary D. Goldberger, M.D., M.S., an assistant professor at the University of Washington, and recently a Robert Wood Johnson Foundation cardiology fellow at U-M , was published online today in The Lancet. Each year, about 200,000 hospitalized patients will experience cardiac arrest, with only half of those surviving the initial arrest, and fewer than 20 percent surviving to discharge.

Goldberger says it’s not surprising that there exists a wide variation among hospitals’ average length of resuscitation attempts, given there’s no firm evidence to guide practitioners when to stop their efforts once resuscitative efforts have started.

“Our findings suggest an opportunity for improving care in this high-risk population. Overall, it may involve standardizing the time required for continuing resuscitation attempts prior to decisions regarding termination of efforts,” Goldberger says.

After examining national data for more than 64,000 cardiac arrest patients between 2000 and 2008, the researchers found that while most patients were successfully resuscitated after a short period of time, about 15 percent of patients who survived needed at least 30 minutes to achieve a pulse.

While the study implies that longer attempts should be considered by medical professionals, U-M cardiologist Brahmajee K. Nallamothu, M.D., M.P.H. and senior author, says the research is only one piece of evidence to weigh during a cardiac arrest case.

“We want to emphasize that our findings cannot identify an optimal duration for which to resuscitate patients,” he says.

Steven L. Kronick, M.D., M.S., one of the paper’s authors, U-M emergency department physician head of the U-M’s CPR committee, agrees and says the research should be a part of ongoing efforts directed toward improving care for cardiac arrest patients.

“The optimal resuscitation duration for any individual patient will continue to remain a bedside decision that relies on careful clinical judgment,” he says. “Overall, we believe these findings present an opportunity to improve resuscitation care, especially at a systems-level.”

Conﬂicts of interest: Dr. Krumholz is the recipient of a research grant from Medtronic through Yale University and is chair of a cardiac scientific advisory board UnitedHealth. All ofther authors declare that they have no conflicts of interest.