ANN ARBOR, Mich. — A new approach to lung scanning could improve the diagnosis and treatment of a lung disease that affects approximately 24 million Americans and is the country’s third-highest cause of death. 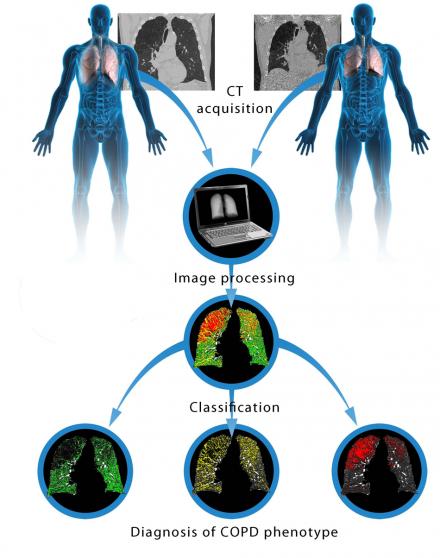 In a new paper published online in Nature Medicine, a team from the University of Michigan Medical School reports on a technique called parametric response mapping, or PRM. They used PRM to analyze computed tomography, or CT, scans of the lungs of patients with chronic obstructive pulmonary disease, known as COPD, who took part in the national COPDGene study funded by the National Heart, Lung and Blood Institute.

The researchers report that the PRM technique for analyzing CT scans allows them to better distinguish between early-stage damage to the small airways of the lungs, and more severe damage known as emphysema. They’ve also shown that the overall severity of a patient’s disease, as measured with PRM, matches closely with the patient’s performance on standard lung tests based on breathing ability.

“Essentially, with the PRM technique, we’ve been able to tell sub-types of COPD apart, distinguishing functional small airway disease or fSAD from emphysema and normal lung function,” says Brian Ross, Ph.D., the Roger A. Berg Research Professor of radiology, professor of biological chemistry and senior author of the new paper. “We believe this offers a new path to more precise diagnosis and treatment planning, and a useful tool for precisely assessing the impact of new medications and other treatments.”

From left to right, PRM images of the lungs of a healthy person, two people with mild to moderate COPD, and a person with severe emphysema. Green is healthy tissue, yellow is small airway damage, and red is more severe damage.

COPD limits a patient’s breathing ability, causing shortness of breath, coughing, wheezing and reduced ability to exercise, walk and do other things. Over time, many COPD patients become disabled as their disease worsens. Most often associated with smoking, COPD can also result from long-term exposure to dust, and certain gases and chemicals.

“In the last decade, CT scan techniques for imaging COPD have improved steadily, but PRM is the missing link – giving us a robust way to see small airway disease and personalize treatment,” says Ella Kazerooni, M.D., M.S., FACS, a radiology professor who leads U-M’s lung imaging program and is a member of the COPDGene trial.

Already, a U-M spinoff company, Imbio, has licensed U-M’s patents on the PRM technique, and is developing the technology for use in early prediction of treatment response of brain tumors and other cancers. Now Imbio has begun developing PRM for COPD subtype diagnosis and tracking.

Ross and co-author Alnawaz Rehemtulla, Ph.D., the Ruth Tuttle Freeman Research Professor of Radiation Oncology, co-founded Imbio and act as scientific advisors to the company. They also co-direct the U-M Center for Molecular Imaging, which pursues a broad range of imaging research.

With the PRM technique, the researchers use powerful computer techniques to overlay the CT scan taken during a full inhalation with an image taken during a full exhalation. The overlaid, or registered, CT images share the same geometric space, so that the lung tissue in the inflated and deflated lungs aligns. The density of healthy lung tissue will change more between the two images than the density of diseased lung, allowing researchers to create a three-dimensional “map” of the patient’s lungs.

PRM assign colors to each small 3-D area, called a voxel, according to the difference in signal changes within each of the areas between the two scans. Green means healthy, yellow means a reduced ability to push air out of the small sacs, and red means severely reduced ability.

PRM could take COPD sub-typing to the next level, say the authors of the new paper. “By distinguishing small airway abnormality  from that involving the lung parenchyma, such as emphysema, PRM could help physicians personalize therapy for individual COPD patients – and select patients for clinical trials of new treatment options more precisely”, says co-senior author Fernando Martinez, M.D., M.S., an internal medicine professor who is also participated in the COPDGene trial.

“PRM can also help to track COPD progression or response to treatment over time,” says lead author Craig Gabán, assistant professor of radiology. Although the current study mostly looked at a “snapshot” of CT scans taken a one time, it also includes data on two U-M COPD patients who were imaged over more than two years. More longitudinal data is needed to make sure that PRM works well for long-term tracking and studies are already underway.

While a simple breathing test called spirometry is still considered the best way to diagnose the disease, spirometry has limitations in its ability to distinguish between different types of lung damage that COPD patients experience.

“The PRM technique is a step forward in being able to better sub-classify patients with COPD so that targeted therapies can be developed,” says co-lead author MeiLan Han, M.D. M.S., a U-M pulmonologist and COPDGene investigator. “This is one of many important studies that is being made possible by the data being collected through NHLBI funded COPD initiatives.”

The research team also included Jennifer Boes, Komal Chughtai, Charles R. Meyer, and Timothy D. Johnson, and Stefanie Galbán. Johnson has a joint appointment in the Department of Biostatistics in the U-M School of Public Health.

Volunteers are needed for the COPDGene trial at U-M. For more information, visit http://umhealth.me/COPDgene or contact 734-764-7388 or [email protected].