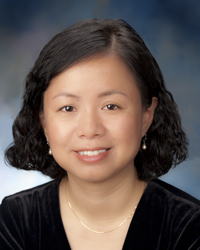 PITTSBURGH—So many variables can contribute to shortness of breath that no person can keep them all straight. But a computer program, capable of tracking more than 100 clinical variables for almost 400 people, has shown it can identify various subtypes of asthma, which perhaps could lead to targeted, more effective treatments.

Wei Wu, a Carnegie Mellon University computational biologist who led the analysis of patient data from the federally funded Severe Asthma Research Program, said many of the patient clusters identified by the computational methods are consistent with subtypes already recognized by clinicians. Those include types of asthma related to allergies, sinus disease or environmental factors.

But the analysis also identified clusters of patients that suggest new subtypes, including one in which frequent, severe asthma symptoms appear to be associated with poor quality of life or depression in some obese women.

The findings by Wu and her collaborators, including physicians at nine major medical centers, have been published online by the Journal of Allergy and Clinical Immunology.

“The ultimate goal is to develop treatments that are based on the biological mechanisms underlying each cluster of patients, rather than simply treating the symptoms,” said Wu, an associate research professor in Carnegie Mellon’s Lane Center for Computational Biology. To that end, she and her collaborators now seek to analyze genetic and genomic factors associated with each of the patient clusters, which promises to identify specific targets for drug treatments.

To identify these patient clusters, Wu used machine learning algorithms, which are computational techniques that are capable of finding patterns in the data as well as learning from data and improving their performance with experience. The analysis was based on 112 variables, such as those measuring various lung functions, immune factors, family history, environmental factors and medical history, for each of 378 people with and without asthma.

Other researchers have used statistical techniques to cluster asthma patients, but none has been able to account for as many variables for each patient as this new study.

“This approach has implications not just for asthma, but for all complex diseases, which include most chronic diseases,” said lead co-author Dr. Sally E. Wenzel, director of the University of Pittsburgh Asthma Institute at UPMC and the University of Pittsburgh School of Medicine. Like asthma, such diseases as osteoporosis, Alzheimer’s disease, kidney disease, Parkinson’s disease and autoimmune diseases are caused by combinations of numerous genetic, environmental and lifestyle factors.

Wenzel said physicians might be able to integrate 10 clinical variables as they evaluate patients with complex diseases, but tracking 100 variables across a large patient population is a near-impossible task. Moreover, physicians have biases that can cloud their analyses.

“Only a few years ago, we were persuaded that medications worked for everyone and that the only reason people had severe symptoms was that they weren’t taking their medications,” Wenzel said. But that has proven not to be the case, as underscored in this latest analysis, which identified a cluster of patients who were heavily medicated with corticosteroids to reduce airway inflammation and who had biological evidence for using them, yet continued to suffer severe shortness of breath.

The study identified several patient clusters that correspond with clinically recognized patient subtypes, but it also identified a new group composed largely of female Hispanics who were obese and reported low quality of life. Though they had normal lung function with little inflammation, they suffered frequent and severe symptoms. Wu said more investigation is needed to identify what is causing asthma symptoms in this patient cluster. Conceivably, this finding could encourage doctors to screen some patients for depression, she added.

Many asthma patients respond well to corticosteroids, but others likely need personalized treatment that targets specific genetic or genomic factors. For a complex disease such as asthma, the gene expression studies necessary for pinpointing those targets are unlikely to be successful if patients aren’t correctly categorized. Wu said computational techniques can play an important role in this initial step of identifying and grouping similar patients together.

The Lane Center is part of Carnegie Mellon’s School of Computer Science, which is celebrating its 25th year. Follow the school on Twitter @SCSatCMU.

Carnegie Mellon computational biologist Wei Wu (pictured above) says a computer program, capable of tracking more than 100 clinical variables for almost 400 people, has shown it can identify various subtypes of asthma, which could lead to targeted, more effective treatments.