Scientists show how men amp up their X-chromosome

Larschan, right, with graduate students Marcela Soruco, left, and Jessica Chery. Credit: Mike Cohea/Brown University
Vive le difference? Not at the level of DNA. Men must increase gene expression on their lone X-chromosome to match the two X’s possessed by women. A new study explains just how men manage to do that. 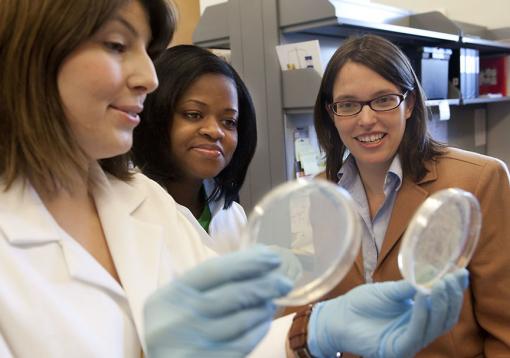 PROVIDENCE, R.I. [Brown University] — What makes a man? His clothes? His car? His choice of scotch? The real answer, says Brown University biologist Erica Larschan, is the newly understood activity of a protein complex that, like a genetic power tool, gives enzymes on the X-chromosome an extra boost to increase gene expression. The process is described in the March 2, 2011, issue of the journal Nature.

The means by which males so freely express the genes on their X-chromosomes intrigued Larschan when she was a postdoctoral scholar in the lab of Mitzi Kuroda at Harvard Medical School and Brigham and Women’s Hospital. To figure the process out, she performed experiments in the convenient model of fruitflies. In collaboration with Eric Bishop, a graduate student at Harvard and Boston University, Larschan finished the analysis at Brown, after joining the faculty as assistant professor in January 2010.

The team had a head start. Scientists already suspected that X-chromosome upregulation had a lot to do with a protein complex called MSL that binds to the X-chromosome. MSL stands for “male-specific lethal” because the mutant form would prove deadly for a male fruitfly. What scientists didn’t know was how it worked. It’s not easy to double the levels of expression of a wide variety of genes on one specific chromosome.

Drilling into the X

It turns out that MSL increases gene expression on the X-chromosome by cracking open the DNA double helix more frequently. In the language of X-chromosome upregulators (a.k.a. men), it’s a specialized drill bit, machined just for the X-chromosome, like a masonry bit is crafted for concrete.

Was that something in question MSL? The team showed that it was by interfering with the MSL complex. When they did that, no greater amount of RNA polymerase persisted along the X-chromosome genes than along any other genes in the genome. Without MSL, the enzyme had lost its ability to push farther.

The finding that the regulation of gene expression occurs farther along genes on the X-chromosome is new, as is the discovery that MSL is promoting it, Larschan said.

“People had thought for a long time that most of the regulation was happening at the beginning of a gene, so this is a new step that people are just starting to think about, which is regulating the entry of polymerase into the rest of the gene,” she said. “MSL is what’s promoting this entry into the gene bodies.”

That’s one small step for MSL, and one giant leap for the manly kind who carry it.

In addition to Larschan, Bishop and Kuroda, other key authors are Peter Park and Peter Kharchenko of Harvard and Children’s Hospital in Boston, and Leighton Core and John Lis of Cornell University. Five of these authors (Kharchenko, Park, Kuroda, Larschan and Bishop) are also authors on a recent paper in Nature providing other fundamental insights into the mechanism of gene expression: “Comprehensive analysis of the chromatin landscape in Drosophila melanogaster.”

Funding for the X-chromosome research came from the National Institutes of Health and a Charles A. King Trust fellowship from the Medical Foundation of Health Resources in Action.