However, most of its organelles, including mitochondria, are not transmitted to the offspring. A Franco-American study involving scientists from CNRS, Inserm, Institut Pasteur, Université Paris-Sud and UPMC(1) demonstrates for the first time how the spermatozoon organelles are digested by the oocyte shortly after fertilization. Published in the journal Science on October 28, 2011, these findings could improve cloning and medically-assisted reproductive technology and help to better understand the evolutionary origin of the elimination of paternal mitochondria.

Mitochondria, the cellular organelles that specialize in the production of energy, possess their own genome. However, in most organisms, including mammals, mitochondrial DNA from the father is not transmitted to the offspring. Only maternal mitochondria, already present in the oocyte, remain. Yet, it was not known how and when the paternal mitochondria were degraded until this study provided the answer, using as a model the nematode C. elegans, a 1-mm long transparent worm well-known to biologists.

The researchers demonstrated that, within minutes after fertilization, the oocyte triggers an autophagic process involving the sequestration in vesicles of sperm components and their subsequent elimination by enzymatic degradation. Using a DNA analysis technique called PCR(2), they could confirm that the entire genetic material from the paternal mitochondria is rapidly degraded after fertilization.

Then, the researchers inactivated the cellular machinery involved in spermophagy and observed that paternal mitochondria remained in the embryo. To determine whether this process is conserved in mammals, they analyzed newly-fertilized mouse oocytes for the presence of specific markers for the initial steps of autophagy. They observed that the autophagy proteins of the oocyte clustered around the mid-piece of the spermatozoon, where the mitochondria are located, suggesting that a similar degradation mechanism does occur in mammals.

Owing to their very high metabolism, spermatozoa could possibly undergo frequent mutations of their mitochondrial DNA. By eliminating this DNA, the oocyte would prevent such mutations from being passed on to and affecting the offspring. This work paves the way for new experiments to test this hypothesis. Indeed, by inactivating spermophagy, organisms containing both paternal and maternal mitochondria could be created and studied for ensuing effects. Finally, these findings raise the issue of the fate of paternal mitochondria in embryos created by cloning or through advanced assisted reproductive technologies. Would these techniques allow the autophagic response of the oocyte and the subsequent degradation of paternal mitochondria, potentially responsible for diseases? The issue is up for discussion. 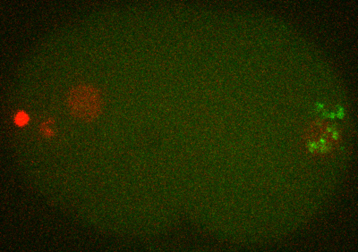 Autophagosomes (green) clustering around the male pronucleus (in red on the right) at the posterior pole of the C. elegans embryo to eliminate organelles from the spermatozoon. 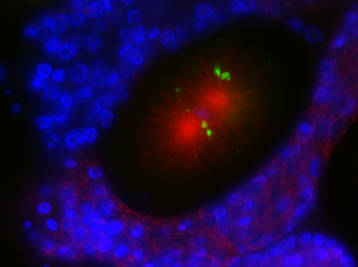 Autophagosomes (green) forming after fertilization to degrade organelles from the sperm during the first divisions of the embryo (mitotic spindle in red).