A place for everything A tiny magnet inside a gelatin capsule allow researchers to hold medicine at an exact place in the intestine where it is best absorbed.
Credit: Mathiowitz Lab/Brown University
Many drugs can only be absorbed in very specific parts of the intestine. In a new paper, Brown University scientists describe a new system that can safely hold a magnetic gelatin capsule in place anywhere in the gastrointestinal tract of a rat. In humans, the system could improve drug delivery and pharmacological research. 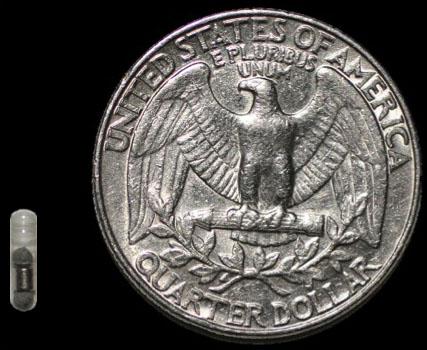 Most patients never have that choice. The problem with administering many medications orally is that a pill often will not dissolve at exactly the right site in the gastrointestinal tract where the medicine can be absorbed into the bloodstream. A new magnetic pill system developed by Brown University researchers could solve the problem by safely holding a pill in place in the intestine wherever it needs to be.

The scientists describe the harmless operation of their magnetic pill system in rats online the week of Jan. 17 in the Proceedings of the National Academy of Sciences. Applied to people in the future, said senior author Edith Mathiowitz, the technology could provide a new way to deliver many drugs to patients, including those with cancer or diabetes. It could also act as a powerful research tool to help scientists understand exactly where in the intestine different drugs are best absorbed.

Hold it right there!
As a magnet moves closer and farther from a small magnetic pill in a rat’s intestine, it keeps track of the force between it and the pill. The technology can be used to safely hold a pill in the right place to maximize absorption of the medicine it carries.
Credit: Mathiowitz Lab/Brown University

“With this technology you can now tell where the pill is placed, take some blood samples and know exactly if the pill being in this region really enhances the bioavailability of the medicine in the body,” said Mathiowitz, professor of medical science in Brown’s Department of Molecular Pharmacology, Physiology, and Biotechnology. “It’s a completely new way to design a drug delivery system.”

The two main components of the system are conventional-looking gelatin capsules that contain a tiny magnet, and an external magnet that can precisely sense the force between it and the pill and vary that force, as needed, to hold the pill in place. The external magnet can sense the pill’s position, but because the pill is opaque to x-rays, the researchers were also able to see the pill in the rat’s bodies during their studies.

The system is not the first attempt to guide pills magnetically, but it is the first one in which scientists can control the forces on a pill so that it’s safe to use in the body. They designed their system to sense the position of pills and hold them there with a minimum of force.

“The most important thing is to be able to monitor the forces that you exert on the pill in order to avoid damage to the surrounding tissue,” said Mathiowitz. “If you apply a little more than necessary force, your pill will be pulled to the external magnet, and this is a problem.”

To accomplish this, the team including lead author and former graduate student Bryan Laulicht took careful measurements and built an external magnet system with sophisticated computer control and feedback mechanisms.

“The greatest challenges were quantifying the required force range for maintaining a magnetic pill in the small intestines and constructing a device that could maintain intermagnetic forces within that range,” said Laulicht, who is now a postdoctoral scholar at MIT.

Even after holding a pill in place for 12 hours in the rats, the system applied a pressure on the intestinal wall that was less than 1/60th of what would be damaging.

The next step in the research is to begin delivering drugs using the system and testing their absorption, Mathiowitz and Laulicht said.

“Then it will move to larger animal models and ultimately into the clinic,” Laulicht said. “It is my hope that magnetic pill retention will be used to enable oral drug delivery solutions to previously unmet medical needs.”

In addition to Mathiowitz and Laulicht, authors on the paper include Brown researchers Nicholas Gidmark and Anubhav Tripathi. Brown University funded the research.