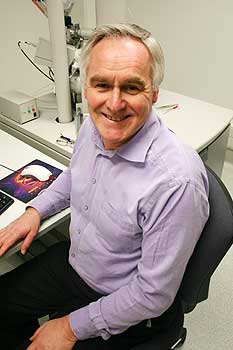 Institute of Molecular BioSciences head Professor Barry Scott and his team, including former post-doctoral student Daigo Takemoto of Nagoya University, have had their paper, Polarity proteins Bem1 and Cdc24 are components of the filamentous fungal NADPH oxidase complex, published in the United States Proceedings of the National Academy of Sciences.

“These oxygen radicals, while damaging in large concentrations, play a vital role in cell growth and development when produced in localised bursts,” Professor Scott says. “For example, they trigger the growth of pollen tubes and root hair in plants, and control development of the inner ear in humans.”

His team has been studying the role of oxygen radicals in the fungal endophyte/grass symbiosis. “The production of these radicals is important for maintaining a stable symbiosis,” he says. “Our new work identifies two key proteins that control the activation of the oxygen radical protein complex.”

The proteins identified by the team, Bem1 and Cdc24, had already been shown to be crucial for budding in baker’s yeast. This work extends their role to polar growth and development in many fungi.

“Oxygen radical signalling is currently a hot area of biology; where these oxygen radicals are produced and how they are triggered is not well known,” Professor Scott says. “This work is of significance because it gives us a better understanding of how the endophyte/grass symbiosis is controlled. But the results also have implications for a many organisms that use the same protein complex, including humans.”

The Proceedings of the National Academy of Sciences is one of the world’s most-cited multidisciplinary scientific serials. Established in 1914, it continues to publish cutting-edge research reports, commentaries, reviews, perspectives and colloquium papers.