Versatility of stem cells controlled by alliances, competitions of proteins 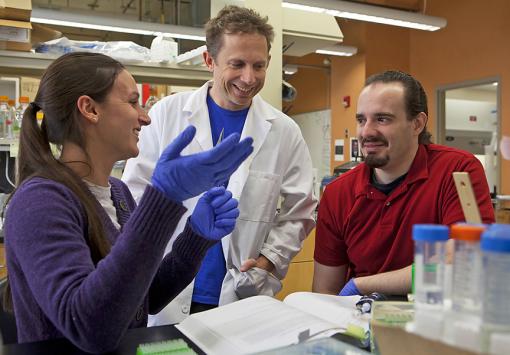 PROVIDENCE, R.I. [Brown University] — Like people with a big choice to make, stem cells have a process to “decide” whether to transform into a specific cell type or to stay flexible, a state that biologists call “pluripotency.” Using a technology he invented, Brown researcher William Fairbrother and colleagues have discovered new molecular interactions in the process that will help regenerative medicine researchers better understand pluripotency.

In a paper published in advance online in the journal Genome Research, Fairbrother’s team showed that different proteins called transcription factors compete and cooperate in the cells to produce complex bindings along crucial sequences of DNA. This game of molecular “capture the flag,” played in teams and amid shifting alliances, appears to be a necessary part of what determines whether stem cells retain their pluripotency and whether specialized, or differentiated, cells can regain it.

In recent years scientists have reported spectacular successes in turning fully differentiated cells back into pluripotent stem cells, a process called reprogramming. But the animals derived from these cells often suffer higher rates of tumors and other problems, Fairbrother said. The reason may be because the complex details of the reprogramming process haven’t been fully understood. He said there are many misconceptions about how reprogramming transcription factors interact with DNA.

“Most people think of a protein binding to DNA as a single, surgical thing where you have this isolated binding event,” Fairbrother said. “But in fact we show that sometimes these binding events occur over hundreds of nucleotides so they seem more like great greasy globs of proteins that are forming. In addition, the proteins interact with each other, diversifying their function by appearing in complexes with with different partners at different places.”

By employing a high-throughput, high-resolution binding assay that he’s dubbed MEGAShift, Fairbrother and his colleagues, who include pathology researchers from the University of Utah School of Medicine, were able to analyze the interactions of several key transcription factors in a region of 316,000 letters of DNA with a resolution as low as 10 base pairs. Through hundreds of thousands of array measurements, lead authors Luciana Ferraris and Allan Stewart, Fairbrother, Alec DeSimone, and the other authors learned previously unspotted patterns of protein interactions.

“How do stem cells stay in the state where they can keep their options open?” Fairbrother said. “A key player is POU5F1. But what are the key players that could interact with it and modulate its function? We’ve developed technology to look at that question.”

One of several findings in the paper concerned POU5F1 and its archrival, POU2F1, which binds to exactly the same eight-letter DNA sequence. Which protein binds to the sequence first influences whether a stem cell specializes or remains pluripotent. Experiments showed that a determining factor was a third protein called SOX2. SOX2 helped both proteins bind, but it helps POU2F1 more than POU5F1. In contrast, the team found that another player, NANOG, exclusively helps POU5F1.

“Who binds next to a protein is a determinant of who ends up binding to a sequence,” Fairbrother said.

With support from the National Institutes of Health, Fairbrother’s group is also applying MEGAShift to other questions, including how protein-protein interactions affect the formation of RNA-protein complexes, which can be even more complicated than binding DNA.

They will also look at the problem of narrowing the field of hundreds of genomic sequence variations that exist naturally in the population down to the real genetic “causal variants” of disease risk. MEGAShift can sort through which variants associated with disease result in an altered binding event that results in a clinical manifestation, such as diabetes or lupus.

The research was funded by the National Human Genome Research Institute.