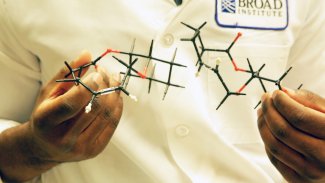 Drugs like the antimalarial quinine, the antibiotic erythromycin, the immunosuppressant rapamycin, and many other fascinating and critical organic compounds contain chains of carbon, linked together in ring.

Damian Young holds up three-dimensional models of two products from
a reaction. Using a new methodology, he and his colleagues can control
which product will form.
Photo by Nick Dua, Broad Communications

Scientists have been using a reaction known as ring-closing metathesis (RCM) for many years to induce molecules to form these carbon rings in the laboratory. This week, a group of researchers led by scientists at the Broad published a paper detailing a way to improve and control the outcome of this important and commonly used reaction. These improvements could help chemists create potential drugs that had previously been difficult and inefficient to obtain.

Metathesis (a word that means “change places”) is a well-respected method in organic chemistry; the scientists who developed it received the Nobel Prize in Chemistry in 2005. But Damian Young, group leader of Diversity Oriented Synthesis at the Broad, and his colleagues recognized the limitations of the RCM reaction and set out to make improvements.

“There is no perfect reaction in organic chemistry,” Young said. “[RCM] is one that a lot of people have been paying attention to for a long time, but we found issues with it that we thought we should address.”

When chemists use RCM to create large rings of more than eight carbons, the outcome of the reaction becomes difficult to control or even predict. Because these newly formed rings contain a double bond, researchers can get a molecular product in one of two confirmations (called “E” and “Z”) or, in many cases, a mixture of both.

“If you get both of them, it’s very hard to separate one from the other,” said Young. “We don’t like mixtures. The whole point is that we would like to be able to control what we get.”

Chemists would also like to use the product from RCM as a starting point, performing additional reactions and adding more components. But after RCM, researchers cannot distinguish the symmetrical carbon atoms on either side of the double bond, which limits the kinds of next steps they can take. The Broad research team developed a way around this by adding a marker to one of the carbons, in this case an atom of silicon.

“This marker helps us differentiate between the two carbon atoms,” said Yikai Wang, a graduate student in the Broad’s Chemical Biology Program and Harvard’s Department of Chemistry and Chemical biology and first author of the paper. “It gives us a chemical handle on one of the carbons so that we can modify the molecule.”

This means that researchers will have more flexibility in tweaking the molecule’s properties and controlling its geometry.

When the researchers put these modifications to use, the results were even better than they had expected. Not only were they able to control and predict the results, they were also able to reduce the number of unwanted byproducts and drive the reaction away from its preferred product.

“That’s really hard to do in chemistry. Usually, you can reinforce what’s already happened, but it’s very difficult to override what the substrate tends to do. In this case we did,” said Young. “This is the serendipitous part of science.”

The work by Young and his colleagues will immediately be put to use at the Broad Institute and beyond. Researchers in the Broad Institute’s Chemical Biology Program will begin using Young’s method in projects related malaria, cancer, and diabetes for which promising compounds have been synthesized using the metathesis reaction.

“Damian’s new methodology can be applied by Broad scientists right away,” said Stuart Schreiber, director of the Broad’s Chemical Biology Program, a core member of the Broad Institute, and a co-author of the paper. “It will advance our abilities to explore the structural variants of these compounds. The new advance will be applied in existing projects to enhance the value of compounds being studied but also, the Broad Chemical Biology team synthesizes candidate compounds that go into these disease-focused activities. And now, the breadth and depth of candidate compounds will be extended because of Damian’s invention.”

Schreiber also emphasized the ingenuity that goes into a project like this since many in the field had accepted the limitations of the widely used metathesis reaction as fact. “It was extremely inventive, extremely imaginative of Damian to conceive of a potential solution. It’s also fairly difficult to go into the laboratory and achieve success, to implement the idea, which he did very effectively,” said Schreiber. “It’s a very nice advance for a young scientist in a very competitive field.”

Other researchers who contributed to this work include Miguel Jimenez, Anders Hansen, and Eun-Ang Raiber. This work was performed by researchers at the Broad Institute and Harvard University.