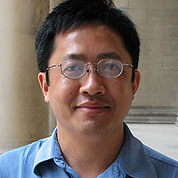 PITTSBURGH—Carnegie Mellon University chemists have created a synthetic form of a cyclic peptide known for its remarkable ability to combat a wide variety of pathogens, including HIV and SARS. Synthetic peptides like the one developed at Carnegie Mellon could provide an exciting new class of pharmaceuticals aimed at combatting hard-to-treat diseases. Furthermore, the manufacturing technique developed by Associate Professor of Chemistry Danith Ly could further the study of cyclic peptides by making the molecules easier and less expensive to produce.

Peptides are short chains of amino acids joined together by peptide bonds. They can be arranged in a linear chain or in a ring that is held together at the center by cross-linked bonds. Scientists have explored the therapeutic potential of peptides for decades.

“The problem with peptides is that they’re small and floppy and, when they bind, they don’t bind with high affinity or selectivity. If you take a linear peptide and inject it into the bloodstream the half-life is less than two minutes,” said Ly, who is a member of Carnegie Mellon’s Center for Nucleic Acids Science and Technology. “Nature gets around this by making peptides circular. In addition, if you inject a cyclic peptide into the blood stream it doesn’t get chewed up and degraded. Its half-life is 40 hours or more.”

Cyclic peptides are some of the most fascinating peptides found in nature — most venoms are cyclic peptides, and many plants used in traditional tribal medicines contain cyclic peptides. These peptides are thought to have great therapeutic potential, but due to their elaborate structure, they have been difficult to recreate in large quantities.

In the current study, the Carnegie Mellon researchers focused on RTD-1, a cyclic peptide held together by three disulfide bonds. Found in rhesus macaques and baboons, it has a broad range of antibacterial, antifungal and antiviral capabilities. Most notably, RTD-1 has been shown to inhibit HIV from entering cells, offering the primates immunity from HIV and AIDS. Early humans also had RTD-1, but a genetic mutation some nine million years ago caused humans to stop producing the peptide.

“RTD-1 is part of the innate immune system of macaques and baboons, and at one time it was part of our immune system,” Ly said. “If we can reproduce this peptide, we possibly could treat a wide range of infections to which humans were once immune.”

Ly and colleagues created a mimic of RTD-1 using the building blocks of natural and synthetic nucleic acids called peptide nucleic acids. While the outside of the mimic peptide maintained the same amino acids as the original, the researchers replaced the complex disulfide bonds at its center with simpler bonds called noncovalent Watson-Crick hydrogen bonds. These are the same bonds that are found in DNA and RNA. By changing the bond formation, the researchers created a peptide that could be easily, and inexpensively, manufactured on a large scale.

They then tested the efficacy of the mimic RTD-1 by mixing the peptide with E. coli, listeria, staphylococcus and salmonella — bacteria that RTD-1 typically protects against. The mimic proved to be effective in killing each of the types of bacteria tested by the researchers, which included both gram-positive and gram-negative bacterial strains. Furthermore, the mimic peptide worked by binding to the bacteria’s cell membrane, not its DNA or RNA, decreasing the probability that the bacteria could develop resistance to the peptide.

The researchers plan to see if the mimic RTD-1 is effective against other types of pathogens, including antibiotic resistant bacteria. They also plan to apply their method to manufacture mimics of other cyclic peptides.

Srinivas Rapireddy, Linda Nhon and Robert E. Meehan from Carnegie Mellon’s Department of Chemistry and Center for Nucleic Acids Science and Technology; Jonathan Franks and Donna Beer Stolz from the Department of Cell Biology and Physiology at the University of Pittsburgh School of Medicine; and Dat Tran and Michael E. Selsted from the Department of Pathology and Laboratory Medicine at the University of Southern California’s Keck School of Medicine also contributed to this study. Their results are published in the March 7 issue of the Journal of the American Chemical Society.

The manufacturing technique developed by Associate Professor of Chemistry Danith Ly, pictured above, could further the study of cyclic peptides by making the molecules easier and less expensive to produce.