Beacons for bone Glowing green spots in these MG-63 bone cells (each blue dot is a nucleus) indicate that a fluorescent “beacon” molecule has bound to RNA produced by expression of the bone-specific ALPL gene.
Credit: Darling Lab/Brown University
In a new study, Brown University researchers demonstrate a new tool for visually tracking in real-time the transformation of a living population of stem cells into cells of a specific tissue. The “molecular beacons,” which could advance tissue engineering research, light up when certain genes are expressed and don’t interfere with the development or operation of the stem cells. 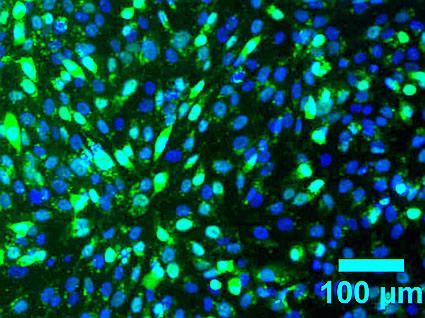 The technology, which Brown University researchers describe in a new study, provides tissue engineers with a potentially powerful tool to discover what it may take to make stem cells transform into desired tissue cells more often and more quickly. That’s a key goal in improving regenerative medicine treatments.

“We’re not the inventors of molecular beacons but we have used it in a way that hasn’t been done before, which is to do this in long-term culture and watch the same population change in a reliable and harmless way,” said graduate student Hetal Desai, lead author of the paper published online Sept. 5, 2012, in the journal Tissue Engineering Part A.

In their research, Desai and corresponding author Eric Darling, assistant professor of biology in the Department of Molecular Pharmacology, Physiology, and Biotechnology, designed their beacons to fluoresce when they bind to mRNA from three specific genes in fat-derived stem cells that are expressed only when the stem cells are transforming into bone cells.

Time lapse: Becoming bone
A population of fat-derived stem cells expresses the bone-specific COL1A1 gene. Green fluorescence from a “molecular beacon” shows increasing expression from day 9, left, through day 11 and day 14. By day 16, right, expression begins to wane. Credit: Darling Lab/Brown UniversityThroughout 21 days of their development, the cells in the experiments remained alive and unfettered, Desai said, except that some populations received a chemical inducement toward becoming bone and others did not. Over those three weeks, the team watched the populations for the fluorescence of the beacons to see how many stem cells within each population were becoming bone and the timing of each gene expression milestone.

The beacons’ fluorescence made it easy to see a distinct pattern in that timing. Expression of the gene ALPL peaked first in more than 90 percent of induced stem cells on day four, followed by about 85 percent expressing the gene COL1A1 on day 14. The last few days of the experiments saw an unmistakably sharp rise in expression of the gene BGLAP in more than 80 percent of the induced stem cells.

Each successive episode of gene expression ramped up from zero to the peak more quickly, the researchers noted, leading to a new hypothesis that the pace of the stem cell transformation, or “differentiation” in stem cell parlance, may become more synchronized in a population over time.

“If you could find a way to get them on this track earlier, you could get the differentiation faster,” Darling said.

Meanwhile the stem cell populations that were not induced with bone-promoting chemicals, showed virtually no beacon fluorescence or expression of the genes, indicating that the beacons were truly indicators of steps along the transformation from stem cell to bone.

Desai said the team took extra care to design beacons that would not alter the cells’ development or functioning in any way. While the beacons do bind to messenger RNA produced in gene expression, for example, they do not require adding any genes to the stem cells’ DNA, or expressing any special proteins, as many other fluorescence techniques do.

The team performed several experiments using the beacons in conventionally developing bone cells to make sure that they developed normally even as the beacons were in operation. While some scientists design RNA-based probes to purposely interfere with gene expression, this team had the opposite intent.

“You know that [.38 Special] song ‘Hold on Loosely but Don’t Let Go?’” Desai said. “That’s sort of the theme song for this. There’s a set of rules for interference RNA, and we essentially did the opposite of what those rules said you should do.”

Now that the beacons’ performance in indicating milestones of stem cell differentiation has been demonstrated, Darling said, the technology can be applied to studying the process in a wide variety of cells and under a variety of other experimental conditions.

In addition to Darling and Desai, the other authors are Indu Voruganti, Chathuraka Jayasuriya, and Qian Chen.

The National Institutes of Health provided funding for the research.