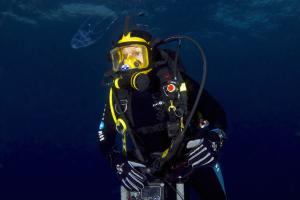 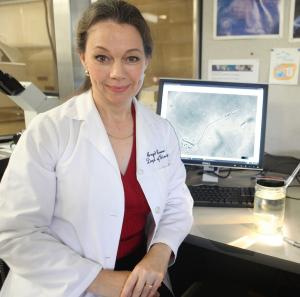 Dr. Angel Yanagihara
*Photos, video and sound are available for this story. More information at bottom of news release.
HONOLULU  – A personal and painful encounter with a swarm of Hawaiian box jellyfish years ago off Waikiki put Dr. Angel Yanagihara on the path to identify the debilitating and sometimes lethal toxin in box jellyfish venom. Using that discovery, Yanagihara has now developed a therapy to not only treat the burning sting of the Hawaiian box jellyfish but to also block the venom of its deadly cousins, such as the Australian box jellyfish, and prevent cardiac arrest or even death in humans following severe stings.
Her findings and data from years of research are the subject of an article published December 12 in PLOS ONE, a peer-reviewed, open-access scientific journal published by the Public Library of Science.
“It is the most prestigious of these types of journals in the world, and it being open-access means that colleagues around the world will have easy access to this data,” said Yanagihara, an assistant research professor affiliated with the University of Hawai‘i at Mānoa’s Pacific Biosciences Research Center and the Department of Tropical Medicine, Medical Microbiology and Pharmacology at the John A. Burns School of Medicine (JABSOM).
“It is extremely satisfying as this is something that folks in the field have driven hard to get to for decades, and what is even more satisfying to me is to bring my 14-year hunt to a peer-reviewed end,” said Yanagihara.
This journey began in 1997 as Yanagihara set out to determine what makes box jellyfish stings so incredibly painful. An avid swimmer, she experienced the pain firsthand while swimming off Kaimana Beach in Waikiki. The biochemist in her was intrigued when she discovered that there was not much research published on box jellyfish venom and no reliable antidote.
In Hawai‘i, box jellyfish stings are usually not much more than a highly painful nuisance, causing beach warnings and sometimes closures once a month and a strong burning sensation in people when stung. However, its larger relatives found in other parts of the world like Indonesia, Thailand and Australia, are known to cause cardiac arrest and even death. An Australian box jellyfish has the potential to kill an adult male in as little as five minutes.
With a grant from the Bradley and Victoria Geist Foundation of the Hawai‘i Community Foundation, which has been a consistent and pivotal supporter of Yanagihara’s research over the years, she set out to crack the code of what is in box jellyfish venom.
Her efforts to “deconstruct the venom” first lead to the discovery of a pore-forming toxin common to all box jellyfish. With this knowledge, she has gone on to develop an inhibitor that blocks that toxin in its tracks and has been proven to work on both human blood and a live animal model.
The technology is the subject of multiple international and U.S. patents and has since been licensed by Waterlife Research, which is in the process of doing clinical trials and bringing the product to market.
Yanagihara has also developed the inhibitor into a topical sting treatment that can be applied to treat the pain, swelling and redness caused by a box jellyfish sting. It was this topical treatment that was used to aid swimmer Diana Nyad in her most recent attempt to swim the 103 miles between Cuba and Florida.
Yanagihara’s work is part of an effort all across the University of Hawai‘i to help state researchers and physicians translate health research into health improvements for Hawai‘i’s unique island community. Called RMATRIX, the ‘R’ is for the National Institutes of Health’s Research Centers in Minority Institutions, which JABSOM belongs to. MATRIX is short for “multidisciplinary and translational research infrastructure expansion.”
“Our goal with RMATRIX is to turn research findings into measurable health improvements, including treatments, and Dr. Yanagihara’s research is an excellent example of how that can be done,” said Dr. Jerris R. Hedges, JABSOM Dean and Barry and Virginia Weinman Endowed Professor of Medicine. “Her laboratory is the ocean which surrounds Hawai‘i, so important to the survival of our Native Hawaiian citizens and vital to the state’s visitor industry as well.”
“This is a strong example of UH innovation and translational medicine,” said Yanagihara. “It demonstrates the value of Hawai‘i-based basic research, innovation, technology development, and patenting through the development of specific deliverables that can benefit the people of Hawai‘i and affected coastal communities around the world grappling with noxious jelly stings.”
Moving forward, Yanagihara is interested in analyzing potential uses of the venom to treat other health issues and exploring the possibilities of other compounds, proteins and molecules she discovered in the venom during her research. For example, she’s found that the pore-forming toxin she discovered in the box jellyfish is very similar to those involved in septic shock and to bacterial toxins. The biomaterial properties of the stinging cells of the box jellyfish have also piqued her interest in a whole different path of investigation.
“We are not only looking at the venom and how to stop that, but we’re also trying to learn what other lessons this ancient biology has to teach us,” said Yanagihara.
Yanagihara’s paper is available online at http://dx.plos.org/10.1371/journal.pone.0051368
PHOTOS, VIDEO AND SOUND AVAILABLE:
Link to download video and sound: http://yousend.it/VyCGE7
BROLL:
SOUNDBITES:
Angel Yanagihara, UH Mānoa assistant research professor
PHOTOS:
Various images with caption info are available for download at: http://www.flickr.com/photos/uhawaii/sets/72157632193767612/
Contact:
Tina Shelton, (808) 692-0897
Director of Communications, John A. Burns School of Medicine, UH Manoa
Angel Yanagihara, (808) 349-8549
Assistant Research Professor, PBRC and JABSOM, UH Manoa