ANN ARBOR, Mich. — When researchers sequence the RNA of cancer cells, they can compare it to normal cells and see where there is more RNA. That can help lead them to the gene or protein that might be triggering the cancer. 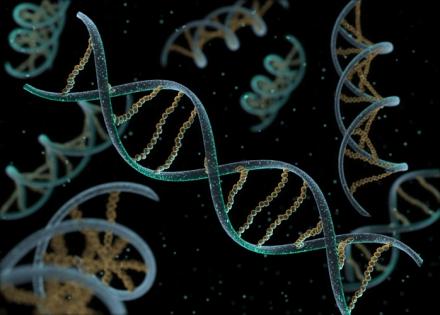 But other than spotting a few known instigators, what does it mean? Is there more RNA because it’s synthesizing too quickly or because it’s not degrading fast enough? What part of the biological equilibrium is off?

After more than a decade of work, researchers at the University of Michigan Comprehensive Cancer Center have developed a technique to help answer those questions.

The method involves a compound called bromouridine, which can be used to tag or label newly created RNA. Researchers apply the bromouridine for 30 minutes then isolate the RNA to see where the new RNA was made. They call this process Bru-Seq.

On the other hand, the researchers can follow up the bromouridine labeling with a rinse with the chemical uridine for different periods of time. They call this BruChase-Seq because the uridine chases away the newly made RNA so they can look at how the RNA ages over the course of one hour, two hours or six hours. In other words, is the RNA degrading like it’s supposed to?

“We can see the whole pattern of all the RNA that’s synthesized and all the RNA that’s stable vs. degrading. We can sort it out in terms of synthesis and stability and see if a particular RNA is more stable in the cancer cell than the normal cell or if it is taking longer to degrade in the cancer cell than in the normal cell,” says study author Mats Ljungman, Ph.D., associate professor of radiation oncology at the U-M Medical School.

“With our technique, we’re adding 10-fold more depth to the picture of how genes are expressed,” he adds.

Ljungman is part of the Cancer Center’s new Translational Oncology Program, which brings together cancer researchers from across the University of Michigan to speed the translation of basic science into clinical trials and new treatment opportunities for patients.

The Cancer Center is currently using gene sequencing techniques to help match advanced cancer patients with potential clinical trial opportunities based on the make-up of their tumor.

In addition to helping with cancer sequencing, Ljungman sees potential for this new technique to help with identifying diseases such as diabetes or inflammation. In the paper describing the technique, published online in Proceedings of the National Academy of Sciences, the researchers describe how they used it to understand an inflammatory response in cells. The researchers have also used the technique to test blood samples.

With a great deal more investigation, Ljungman envisions that one day the test could potentially be offered to people visiting their doctor as a way to monitor changes in the RNA.

“If something is significantly changed from one test to the next, it could be a red flag or an early warning sign of disease. That would be the broadest use of this technology,” Ljungman says.

NOTICE: Except where otherwise noted, all articles are published under a Creative Commons Attribution 3.0 license. You are free to copy, distribute, adapt, transmit, or make commercial use of this work as long as you attribute the University of Michigan Health System as the original creator and include a link to this article.