Most often, people associate circadian rhythms with the symptoms of jet lag that occur after crossing several time zones. Circadian rhythms, which get their cues from light and darkness, can change sleep-wake cycles, hormone secretion, body temperature and other bodily functions. 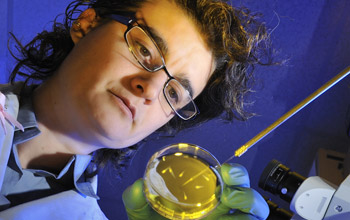 When disrupted, they can have important health consequences. In addition to the temporary fatigue and disorientation of jet lag, abnormal circadian rhythms have been linked to certain sleep problems, depression, heart attacks, alcoholism, bipolar disorder and seasonal affective disorder.

But do they raise the risk of cancer?

It’s an intriguing question, and one that fascinates Carla Finkielstein, associate professor of biological sciences at Virginia Polytechnic Institute and State University. She is studying the molecules that regulate the body’s circadian rhythms, trying to find out whether environmental conditions that go awry, such as unscheduled exposure to light, can cause them to change their signals to the body’s cells in ways that cause the cells to divide and grow out of control.

“A circadian molecule could be saying ‘go, go, go’ in a cell and therefore signaling for proliferation when it should be saying ‘stop,’ simply because you are exposed to light when you shouldn’t be,” she says.

She specifically is interested in breast cancer among women who work night shifts, such as nurses. A number of epidemiological studies have shown a relationship between such women and an increased risk of breast cancer, suggesting that the disruption of circadian rhythms, and its resulting impact on hormones, could predispose women to developing the disease.

“To be sure, there are certain risks associated with developing breast cancer, but 90 percent of breast cancer cases are sporadic,” she says. “When it’s sporadic, it catches you totally off guard. My question is: is there any way we can prevent a sporadic form of breast cancer from arising?”

Her work ultimately could have important implications for the prevention of breast cancer, as well as for treatment options, in particular, the timing of drug delivery. “It could offer insights into the best time of the day to provide therapy, to increase its efficiency and reduce side effects,” she says. “Suppose it’s more effective if a person receives it in the late afternoon, instead of early morning, and you might not have to deliver such high doses. Then, you will have the same effect with a lower dose, which could decrease those often brutal side effects that lead patients to quit some therapies.”

The significance for prevention lies in “uncovering functionally relevant circadian-controlled signaling mechanisms in the cell,” she says. “[This] will result in more effective screening strategies of prevention value…perhaps we could develop a test that could analyze a person’s molecular profile in a way that could identify abnormal or unexpected changes in circadian-controlled signals that correlate with disease development. Imagine taking night workers and running this test once a year, for example.

“We expect that control over circadian habits will be an effective and cost-efficient approach for reducing cancer risk and for modifying the biological behavior of tumors,” she adds.

Finkielstein is conducting her research under a National Science Foundation (NSF) Faculty Early Career Development (CAREER) award, which she received in 2009 as part of NSF’s American Recovery and Reinvestment Act. The award supports junior faculty who exemplify the role of teacher-scholars through outstanding research, excellent education and the integration of education and research within the context of the mission of their organization. NSF is funding her work with about $1.1 million over five years.

In the lab, Finkielstein is using genetically engineered human molecules to study the behavior of the genes that control our circadian rhythms.

“In one of our projects, we incorporate circadian molecules into cells and look at the genes that are turned on and off based on unscheduled levels of expression of these molecules,” she says. “We check on how cells behave as result of this abnormal condition, and what the long-term consequences are of such exposure for cell growth and division.”

She hopes her research also will provide a molecular underpinning for those working in the circadian field of chronobiology.

“This field is populated by observational studies, but lacks a true molecular basis,” she says. “We are providing other scientists with a battery of molecular connections that can explain many of their observations. Hopefully our findings can be incorporated in many clinical trials to help improve the efficiency of current therapies.”

For those women identified as having an increased risk, “possibly you could change your work schedule, and it may prevent sporadic forms of cancer, such as breast cancer, from developing,” she says. “You might be able to get screened for circadian-related abnormalities and find out that it’s time to switch from a night shift to a day shift. It might not solve all cases of breast cancer, but it might prevent some from arising and perhaps we could see a drastic reduction.”

The educational component of her grant, which she runs with collaborator Erin Dolan, associate professor of biochemistry and molecular biology at the University of Georgia, aims to promote learning and career development of youngsters at the high school level from underserved rural and urban areas of Virginia.

The six-week program involves an international component, where students from Virginia spend three weeks in Argentina, Finkielstein’s native country, attending classes at the Otto Krause high school, one of the elite technical schools in the country. While there, the program provides intense daylong training in chemistry from 7:30 a.m. until 6 p.m. “Before you become a molecular biologist, you need to be a chemist,” Finkielstein says.

Upon their return, they spend an additional three weeks working in Finkielstein’s lab, studying specific areas of molecular biology by rotating through several different “stations.” There, they learn how to manipulate DNA, synthesize bacterial proteins, microscopy, bioinformatic analysis of genomic sequences, and how to work with animals, in their case, the African frog Xenopus laevis.

“This happens just around the time we are selecting the scholars from Virginia, so they get to meet some of the Argentinean kids they will see again when they travel abroad, which is very cool for them,” Finkielstein says. “The outcome of this program has been amazing so far, students from both groups enrolled in higher education, all of them in some form of natural science studies, and they have a terrific experience traveling abroad.”