A permissive captor A computer rendering depicts a GroEL protein hunting down an Aβ protein. Four complementary styles of nuclear magnetic resonance spectroscopy contributed to an understanding of the protein-to-protein interaction.< 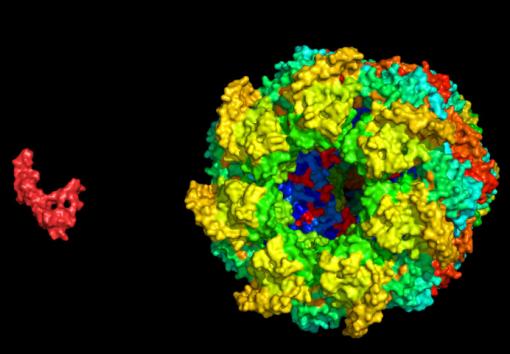 PROVIDENCE, R.I. [Brown University] — When working a cold case, smart investigators try something new. By taking a novel approach to nuclear magnetic resonance spectroscopy — a blending of four techniques — scientists have been able to resolve a key interaction between two proteins that could never be observed before. They report on their findings the week of June 24, 2013, in Proceedings of the National Academy of Sciences(PNAS).

The interaction, which the team first described, is nearly universal across all of life. A protein machine called a chaperone takes hold of a disordered smaller protein to help it find its proper folded conformation. In this case, the team set up test-tube experiments where they hoped to watch the capsule-shaped bacterial chaperone GroEL capture a disordered amyloid β (Aβ) protein, a molecule that in humans is central in Alzheimer’s disease.

The two proteins are well studied, but the motions they go through when they first meet — when the open GroEL capsule captures its target — have been invisible to scientists. Electron microscopy and X-ray crystallography are only good for taking snapshots of easily frozen moments in time. NMR is capable of sensing the interactions and kinetics of protein handshakes as they occur, but in some cases any single technique can provide only hints and whispers of what’s going on.

Brown University biologist Nicolas Fawzi, who was a postdoctoral researcher in the group of Marius Clore at the National Institute of Diabetes and Digestive and Kidney Diseases (NIDDK) within the National Institutes of Health (NIH), worked with co-authors and NIDDK researchers David Libich, Jinfa Yang and Marius Clore to piece together the story of the proteins by combining four different NMR techniques. They figured out what each one could tell them about the interaction and built the case presented in PNAS.

“None of the four techniques alone gave us sufficient information,” said Fawzi, assistant professor of medical science in Brown’s Department of Molecular Pharmacology, Physiology, and Biotechnology. “Only by using them all together would we be able to figure out the structure and motions of Aβ when it was bound to GroEL. By having four indirect measurements together, that was able to give us a complete picture.”

The researchers acted like a team of detectives working on a case in which no single witness saw everything. Instead they found three witnesses, each with something different to contribute, and then one more that could corroborate some of what the others revealed and rule out other possibilities. The NMR techniques they used were lifetime line broadening, Carr-Purcell-Meinboom-Gill (CPMG) relaxation dispersion spectroscopy, and exchange-induced chemical shifts.

“The fourth technique we employed was Dark-state Exchange Saturation Transfer (DEST) spectroscopy, which we had developed in my lab at the NIH in 2011,” said Clore, also the paper’s corresponding author. “We were able to more effectively conduct our research by using that tool to corroborate and extend the information afforded by the other three measurements.”

Bouncing with the chaperone

The mystery debated among molecular biologists was what the GroEL chaperone requires of its captives at the moment they engage. Does it force them into a particular conformation? Does it hold on tightly while it closes its capsule lid around the smaller protein, or does the captive stay in motion at all?

What the team observed is that the GroEL is a permissive captor. It bound Aβ at just two “hydrophobic” sites, leaving the smaller protein to otherwise dangle in a variety of conformations. It also didn’t keep it bound the entire time, letting it instead detach and re-bind. Essentially Aβ would bounce off and on within GroEL’s binding cavity.

“By using these four techniques together we were able to extract information about the structure of the protein while it binds as well as how fast it comes on and off and what it’s doing at each position,” Fawzi said. “Instead of forming more particular structure upon binding it appears to retain great conformational heterogeneity.”

The lifetime line broadening technique, for example, told them that the Aβ was interacting with something big (GroEL), while the CPMG and chemical shift observations combined to show the length of time Aβ spent on GroEL before unbinding, as well as the structural details of Aβ when it was bound to GroEL. DEST provided information that could confirm much of the story of the other techniques.

Fawzi said GroEL’s laid-back approach could be a matter of being able to bind many different proteins in disordered conformations, but also of saving energy. Forcing proteins into a specific conformation just to make and sustain the initial capture would require more energy than it’s worth.

Eventually, in moments after those the team resolved in this study, GroEL closes its lid and encapsulates its target proteins fully, Fawzi said. That’s when it invests in forcing them to fold the right way.

For molecular and structural biologists, the newly proven blend of NMR techniques could open a number of other cold cases of elusive interactions.

“We can now look at how these big machines can do their job while they are working,” Fawzi said. “This is not just limited to this GroEL machine.”

The research was supported by NIDDK Intramural Research Program and supplemented by the NIH Intramural AIDS Targeted Antiviral Program of the NIH Director.

NIH disclaimer: The content of this news release is solely the responsibility of the authors and does not necessarily represent the official views of the National Institutes of Health.