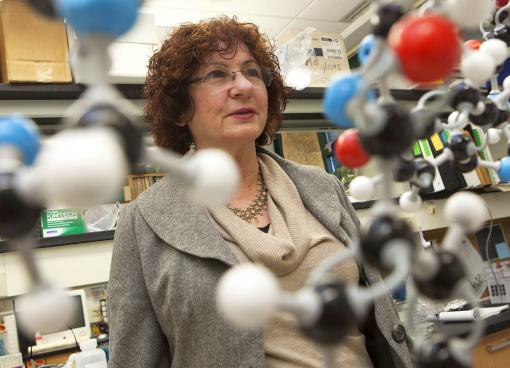 PROVIDENCE, R.I.[Brown University] — For protein-based drugs such as insulin to be taken orally rather than injected, bioengineers need to find a way to shuttle them safely through the stomach to the small intestine where they can be absorbed and distributed by the bloodstream. Progress has been slow, but in a new study, researchers report an important technological advance: They show that a “bioadhesive” coating significantly increased the intestinal uptake of polymer nanoparticles in rats and that the nanoparticles were delivered to tissues around the body in a way that could potentially be controlled.

Edith Mathiowitz    “The distribution [of orally delivered protein-based medicines] in the body can be somehow controlled with the type of polymer that you use.”    Credit: Mike Cohea/Brown University

“The results of these studies provide strong support for the use of bioadhesive polymers to enhance nano- and microparticle uptake from the small intestine for oral drug delivery,” wrote the researchers in the Journal of Controlled Release, led by corresponding author Edith Mathiowitz, professor of medical science at Brown University.

Mathiowitz, who teaches in Brown’s Department of Molecular Pharmacology, Physiology, and Biotechnology, has been working for more than a decade to develop bioadhesive coatings that can get nanoparticles to stick to the mucosal lining of the intestine so that they will be taken up into its epithelial cells and transferred into the bloodstream. The idea is that protein-based medicines would be carried in the nanoparticles.

In the new study, which appeared online June 21, Mathiowitz put one of her most promising coatings, a chemical called PBMAD, to the test both on the lab bench and in animal models. Mathiowitz and her colleagues have applied for a patent related to the work, which would be assigned to Brown University.

In prior experiments, Mathiowitz and her group have shown not only that PBMAD has bioadhesive properties, but also that it withstands the acidic environment of the stomach and then dissolves in the higher pH of the small intestine.

The newly published results focused on the question of how many particles, whether coated with PBMAD or not, would be taken up by the intestine and distributed to tissues. For easier tracking throughout the body, Mathiowitz’s team purposely used experimental and control particles made of materials that the body would not break down. Because they were “non-erodible” the particles did not carry any medicine.

The researchers used particles about 500 nanometers in diameter made of two different materials: polystyrene, which adheres pretty well to the intestine’s mucosal lining, and another plastic called PMMA, that does not. They coated some of the PMMA particles in PBMAD, to see if the bioadhesive coating could get PMMA particles to stick more reliably to the intestine and then get absorbed.

First the team, including authors Joshua Reineke of Wayne State University and Daniel Cho of Brown, performed basic benchtop tests to see how well each kind of particles adhered. The PBMAD-coated particles proved to have the strongest stickiness to intestinal tissue, binding more than twice as strongly as the uncoated PMMA particles and about 1.5 times as strongly as the polystyrene particles.

The main experiment, however, involved injecting doses of the different particles into the intestines of rats to see whether they would be absorbed and where those that were taken up could be found five hours later. Some rats got a dose of the polystyrene particles, some got the uncoated PMMA and some got the PBMAD-coated PMMA particles.

Meanwhile, the different particles had very different distribution profiles around the body. More than 80 percent of the polystyrene particles that were absorbed went to the liver and another 10 percent went to the kidneys. The PMMA particles, coated or not, found their way to a much wider variety of tissues, although in different distributions. For example, the PBMAD-coated particles were much more likely to reach the heart, while the uncoated ones were much more likely to reach the brain.

The apparent fact that the differing surface properties of the similarly sized particles had such distinct distributions in the rats’ tissues after the same five-hour period suggests that scientists could learn to tune particles to reach specific parts of the body, essentially targeting doses of medicines taken orally, Mathiowitz said.

“The distribution in the body can be somehow controlled with the type of polymer that you use,” she said.

For now, she and her group have been working hard to determine the biophysics of how the PBMAD-coated particles are taken up by the intestines. More work also needs to be done, for instance to demonstrate actual delivery of protein-based medicines in sufficient quantity to tissues where they are needed.

But Mathiowitz said the new results give her considerable confidence.

Another frontier for the delivery of nanoparticles is devising a safe method to make nanoparticles, Mathiowitz said, but, ”we have already developed safe and reproducible methods to encapsulate proteins in tiny nanoparticles without compromising their biological activity.”

In addition to Reineke, Cho, and Mathiowitz, other authors on the paper are Yu-Ting Liu Dingle, Stacia Furtado, Bryan Laulicht, Danya Lavin, and Peter M. Cheifetz, all of Brown University during the research.