For the common fruit fly, Drosophila melanogaster, the answer lies in the chemoreceptor Gr32a, located on sensory neurons on the male fly’s foreleg.

“In nature, this sensory system would prevent the creation of hybrids that may not survive or cannot propagate, thereby helping the species preserve its identity,” said senior author Nirao M. Shah, MD, PhD, a UCSF associate professor of anatomy.

The work is reported in a paper published online in Cell on June 27.

Before mating, the researchers found, the male approaches a prospective female and taps her repeatedly on the side with his foreleg. “As he does so, he is using Gr32a to detect, or actually taste, unpleasant-tasting waxy chemicals on the cuticle, or outer skin, of individuals of other species,” said co-author Devanand S. Manoli, MD, PhD, a UCSF postdoctoral fellow in anatomy and fellow in child and adolescent psychiatry. “If the prospective mate is not of the same species, and Gr32a is activated, the mating ritual stops right there, even if the male has never encountered a female of another species before.” 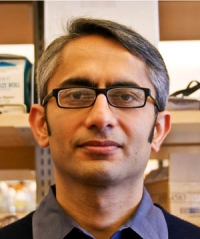 The researchers also found that if the male fly’s Gr32a neurons are activated directly, courtship with other species can be suppressed in these male flies. “These and other findings show that Gr32a neurons are both necessary, in terms of having this taste receptor, and sufficient, in terms of their activity, to prevent males from courting females of other species,” said Manoli.

Remarkably, said Shah, Gr32a mediates the rejection of a large range of fruit fly species that last shared a common ancestor with D. melanogaster 2 million to 40 million years ago.

“Indeed, D. melanogaster males lacking Gr32a will attempt to mate with fruit flies of other species even if these species are two to three times larger and look different to the untrained human eye,” Shah said. “Of course, these other species reject such mating attempts.”

Likewise, when the section of the foreleg with Gr32a neurons is surgically removed, said Manoli, the male will court females of other species. “We also observe this behavior when we remove the forelegs of males in species that are closely related to D. melanogaster,” he said, “but not in D. virilis, which is a more distantly related species. It’s possible that D. virilis is using a different mechanism to distinguish other species – we don’t know yet.”

Species Recognition in the Brain

Another discovery in D. melanogaster, said Shah, is that neurons in the fly’s brain, expressing male-specific versions of the gene known as fruitless, “seem to connect up with these Gr32-sensing neurons on the foreleg. So we’ve begun to delineate not only the sensory pathway but also the central components of the neural circuit that is activated when the male encounters an animal from another species.” 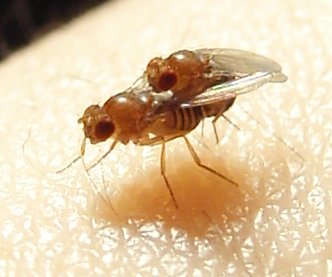 Interestingly, said Shah, males use a mechanism that is “similar, but not identical,” to inhibit the courting of other males of the same species. “That system involves additional chemoreceptors and neural pathways, which makes sense,” he said, “since if you’re a male, other males of your own species might be competing with you for food, territory and mates, and so you would be identifying them for different reasons, in different circumstances.”

The scientists were surprised to discover that although a D. melanogaster female has neurons that express Gr32a, she does not use them to reject males of other species. “This does make intuitive sense,” said Shah. “Males and females have evolved different systems for rejecting potential mates from other species because they have different biological needs for reproduction. Females invest far more energy in generating offspring – laying eggs, for example, or in mammals, carrying young in the womb. Males generate sperm in large numbers, which is not as energetically expensive.”

Similar Systems in Other Species

Manoli noted that other animals may have equivalent mechanisms for distinguishing members of other species, “but these are going to be specific to the ecological niches of those species — that is, how they function in their environments. Rodents, for example, like flies, primarily use smell to find mates and food, and avoid predators. Some species of fish use electrical impulses. Many primates, including humans, rely on visual and auditory cues.”

Listen to Nirao Shah talk about his discovery  in fruit flies in an audio interview with Cell.

Yeast are known to use chemosensory mechanisms to not initiate sexual modes of reproduction with other yeast species, said Shah, who cited pioneering research in yeast done by UCSF faculty, including David Julius, PhD and the late Ira Herskowitz, PhD.

For Shah and his team, the next step is to investigate whether other fruit fly species also use Gr32a to tell other species from their own. “We want to see if this system is conserved across related species,” he said.

The study was supported by funds from the China Scholarship Council, HHMI, a NARSAD grant, the UCSF Program for Breakthrough Biomedical Research, the National Science Foundation, the Burroughs Wellcome Fund, the Ellison Medical Foundation, the McKnight Foundation for Neuroscience and the Sloan Foundation.